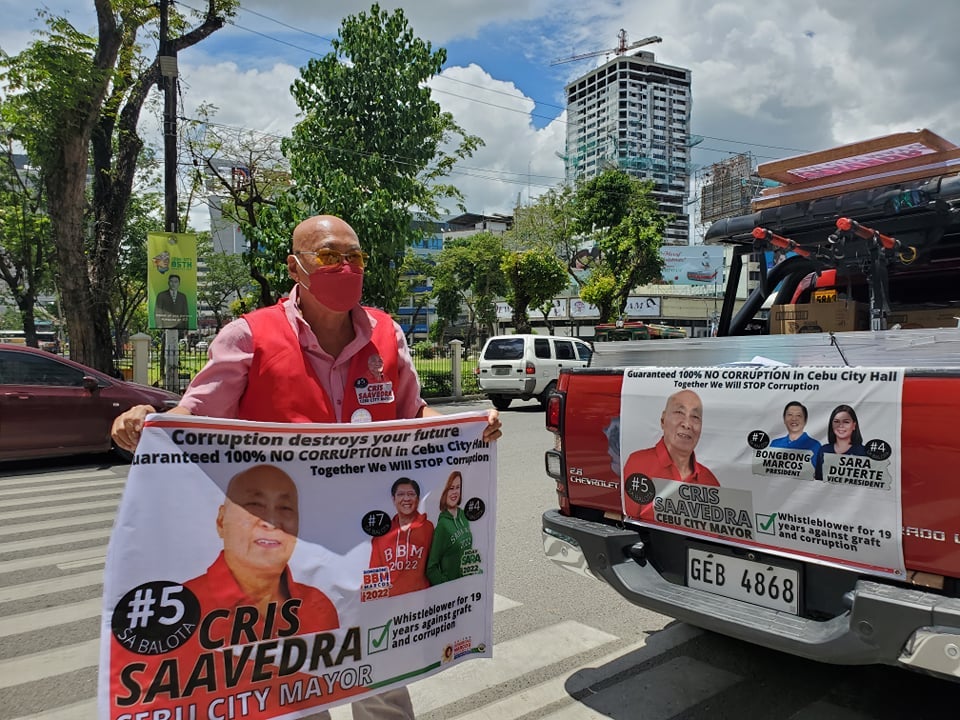 Crisologo Saavedra Jr., an anti-corruption advocate who is running for mayor of Cebu City, says he is into “personal campaigning” to win voters’ hearts. | Jewil Anne Tabiolo

Instead of a typical campaign trail of holding caravans or motorcades, the independent mayoral candidate believes that “one-on-one campaign” will resonate better among voters.

Local candidates began to launch their election campaign on Friday, March 25, 2022, the official start of the local campaign period for the elections.

“I am going one-on-one, I go to every voters among the streets and shake their hands and ask them what they need and talk to them about my platforms, and what is my promise unlike the other politicians,” said Saavedra, who is running as an independent candidate.

He believes that grand rallies and common campaign strategies of handing out freebies during sorties are unnecessary and can only result in overspending.

This, he said, would be a display of excess which could imply dishonesty for voters.

Saavedra expressed confidence that his mayoral bid would play out well in this year’s political race.

Moreover, he claims that ‘corruption’ in the city remains unchanged.

“There are two groups that are running in City Hall for 30 years. So nothing happens, and I believe people want a change now because corruption is getting worse everyday now,” said Saavedra.

He said that severe corruption was what drove him to run as a mayor of the city.

On top of that, he vows to establish free housing, free medication, and employment availability.

Saavedra has started his personal campaign from Barangays Bulacao to Talamban and believes that being a supporter of the BBM-Sara tandem will only help him further catapult to the mayoral seat.

He also showed an appointment letter issued by the United Bongbong Marcos Movement For President, and that he was declared chairman by the political camp of these following cities: Cebu, Mandaue, and Lapu-Lapu.

“Luckily, I am also the mayor aspirant for Cebu City and I am campaigning for Marcos and Sara exclusively,” said Saavedra.