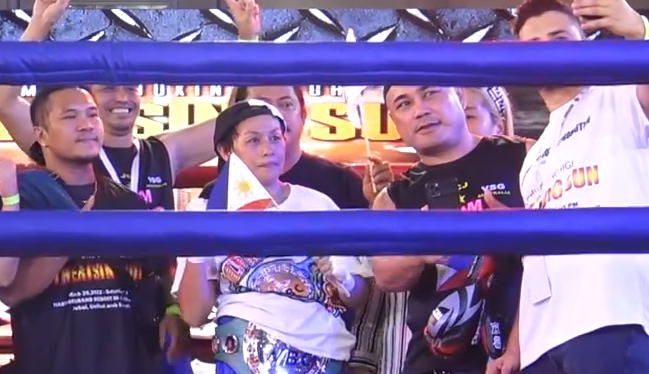 The 31-year-old Filipina boxer, who spent more than a month here in Cebu to train under the tutelage of veteran Cebuano boxing trainer Brix Flores, outboxed Castle en-route to win the title via unanimous decision.

With the victory, Guro improved to 11 wins with 4 knockouts, 7 losses and 1 draw. Castle suffered her second loss with 3 wins and 3 knockouts in hand.

The road warrior Guro won against fellow Filipina Joan Ambalong via unanimous decision on May 7, 2018 in Lala, Lanao Del Norte.

Her victory over Castle extended her winning streak to five. Prior to that, she fought three times in Japan and once in Mexico. Unfortunately, she lost all four bouts including the World Boxing Organization (WBO) world female atomweight title against Nao Ikeyama in 2015. She lost to Ikeyama via unanimous decision in their world title duel held in Osaka, Japan.

In addition, she also lost in her second world title bid in the hands of another Japanese, Yuko Kuroki, a year after her loss to Ikeyama.

After her four-fight losing skid, Guro went on bouncing back strong, winning against fellow Filipinas in Joan Ambalong, Marichu Semillano, and Ambalong.

Her biggest win prior to her victory last Saturday was against Japanese Umi Ishikawa. She bested Ishikawa via unanimous decision to clinch the WBC Asian Boxing Council Continental atomweight title in 2018.