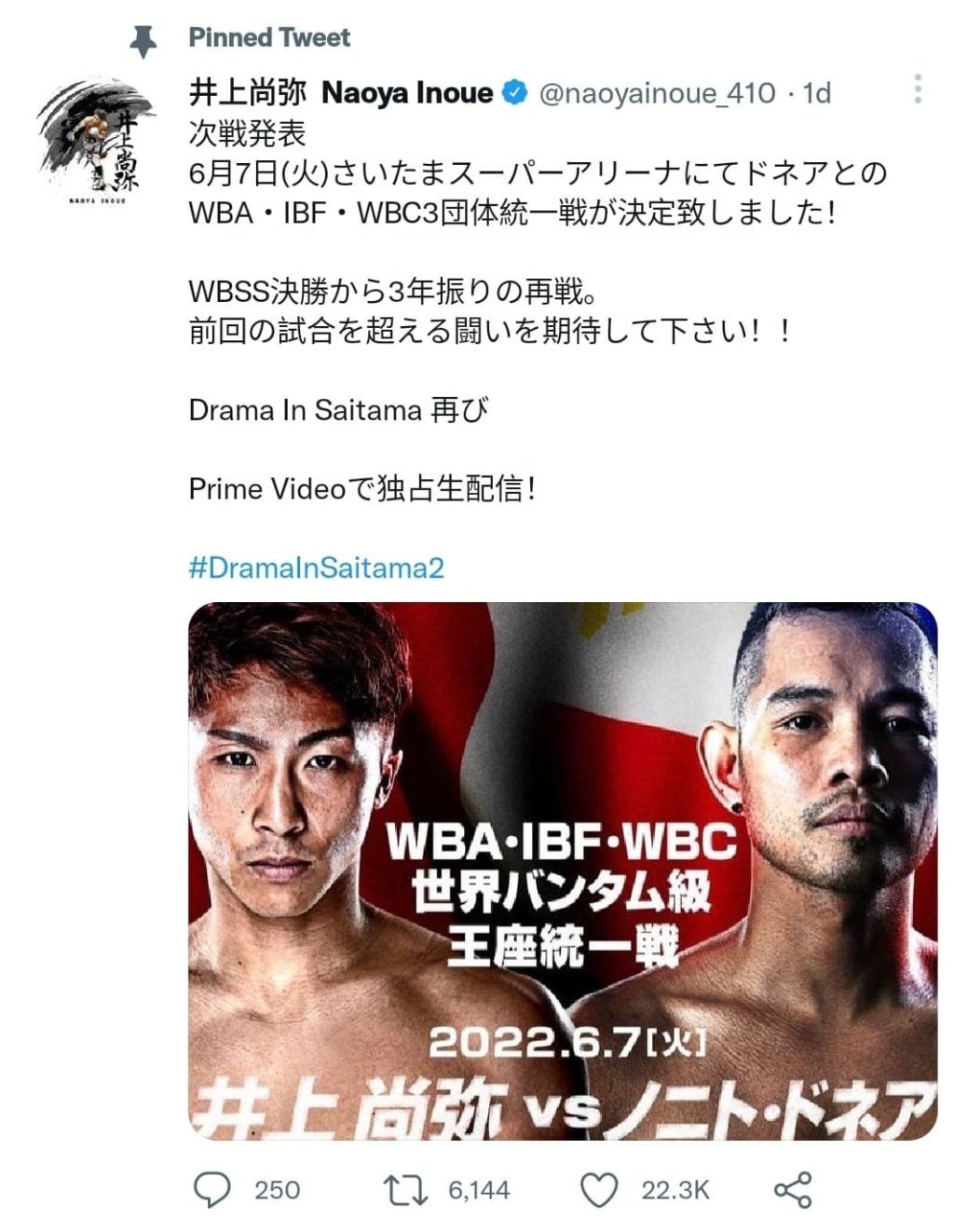 tnoue, the 28-year old reigning WBA, and IBF world bantamweight king announced the mega-fight on his Twitter account on March 30, 2022.

Donaire Jr. on the other hand did not make any announcements about the mega-fight.

The anticipated showdown between the two boxing superstars will serve as a unification duel for three world titles.

Inoue and Donaire’s first encounter was named 2019’s “Fight of the Year,” with Inoue winning the bout via unanimous decision. That match was the finals of the World Boxing Super Series tournament.

However, despite being the overwhelming favorite, Inoue had a difficult time dealing with Donaire who pressured him from the opening bell to the final round.

Inoue had to overcome a fractured orbital bone on his right eye after getting hit with Donaire’s punches and managed to knock down Donaire with a body shot in the 11th.

That KO proved to be the telling blow to Donaire’s title aspirations as the Japanese escaped with a close UD victory.

Many boxing fans around the world have been waiting for this rematch to happen. Last year, there were initial talks about a possible rematch, but those didn’t materialize.

Instead, both champions were tangled in an online saber-rattling with another bantamweight world champion, Johnriel “Quadro Alas” Casimero.

Casimero, the WBO world bantamweight champion initially had a scheduled unification showdown against Donaire but the fight was later on scrapped due to various issues.

Casimero then focused his sights on challenging Inoue, but it didn’t come to fruition either.

On paper, Inoue has the advantage with 22 wins and 19 knockouts but Donaire is the more accomplished and experienced warrior being a four-division world champion with a record of 42-6 (win-loss) with 28 knockouts.

Making the rematch more exciting is to see if Donaire’s renaissance continues.

Last year, the Filipino knocked out Nordine Oubaali to snatch the WBC title at 38 years old. He went on to defend the title by knocking out fellow Filipino Reymart Gaballo in December.

Both boxers were also once named pound-for-pound kings in boxing.       /rcg