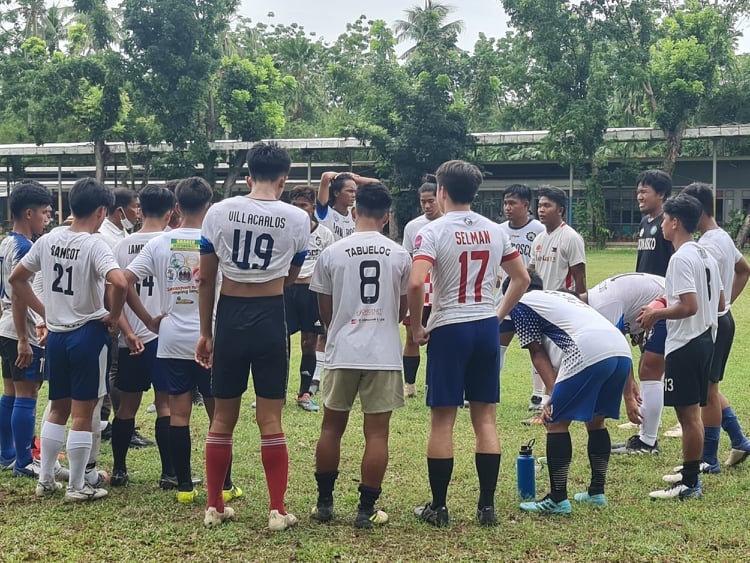 CVFA’s footballers are in a huddle during their training camp in preparation for the PFF U-19 National Championships regional elimination tournament. | Contributed Photo

The 28-man CVFA U-19 squad was formed to represent the football association for the Philippine Football Federation (PFF) Under-19 National Championships regional eliminations on June 22, 2022, in Cebu.

“Why 28 instead of 25 man? Para naa pa tay mabunot after final submittal of squad for injuries and any circumstances na dili natu mapugngan,” said Partosa.

(Why 28 instead of 25? So that we can still have a replacement after the final submission of the squad for injuries and any circumstances that we cannot prevent.)

The final 28-player selection of CVFA was trimmed down from 35 footballers after a week-long training camp and try-outs conducted by the team in Cebu. These 35 hopefuls qualified during a tryout that happened last March 23 to 24, 2022 at the Eva Field in Bulacao, Talisay City, Cebu.

The regional eliminations was supposed to happen on April 18, but it was eventually moved to June 22, 2022.

Partosa added that the team was looking for a partner or a sponsor that could support them all the way to the tournament.

The team will be headed by veteran and multi-titled football coach Glen Ramos along with his coaching staff comprised of Jingoy Roa, Gary Garciano, Jojo Tapia, and physical therapist Nico Quiñones.