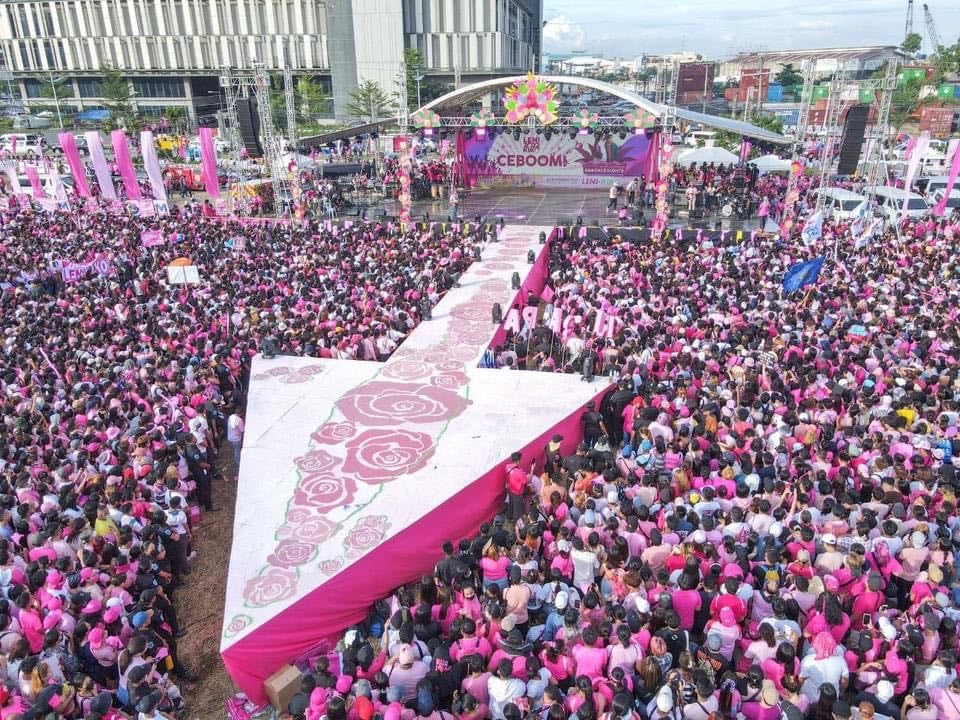 It was Vice President Ma. Leonor Robredo and Senator Francisco “Kiko” Pangilinan’s turn to woo Cebu once more, the most vote-rich province, as they ramp up their campaign in the last few days before the elections in hopes of winning the Presidency and Vice Presidency.

The Leni-Kiko camp and their Cebuano supporters had the challenge to upstage the recent events, although organizers said they were unfazed.

Yet the supporters of the vice president and the senator delivered a sea of pink at the NRA.

People gathered with their flags and banners of witty slogans and wordplay as a form of support to the tandem.

They lighted their phones to show the massive crowd behind the darkness and they screamed repeatedly, “Daog na! Daog na!” translating to, “It’s a win! It’s a win!”

The crowd sang a happy birthday to Robredo for her upcoming 57th birthday on April 23.

Senator Pangilinan promised to prioritize agriculture and education should he be voted as vice president.

He reminded Cebuanos that the May 9 elections would determine the future of the country in the next six years and he hoped that each voter would consider their act of suffrage sacred.

(We will vote for those who have the capability, the track record. What future do we want? We are the only ones who have a say on who will sit in the highest position of the country. We are the power for that.)

Robredo said that the upcoming elections would show the true power of the Filipino people, particularly the Cebuanos.

She said that even if the largest party of the island, One Cebu, had endorsed Marcos and Duterte-Carpio, the united Cebuano dream as shown in the CEBOOM Leni-Kiko People’s Grand Rally 2.o would keep the fight running.

Robredo added that it might seem daunting that local politicians were endorsing her political opponents, but she reminded her supporters and the public that it would not be the local politicians who would choose the national candidates, it would be the people who would make their own choices.

Leni-Kiko presented themselves as the choice to Cebuanos saying that their tandem would bring about the success of the country if Filipinos would trust them.

While organizers deemed the event a success, the estimated 250,000 crowd fell short of the 300,000 in the Uniteam Festival.

Ricky Ballesteros, one of the major organizers of the grand rally, said that based on the size of the venue at 52,659 square meters with an estimated four to five persons per square meter, the crowd should be around 250,000.

The police estimate for CEBOOM were even lower at only 150,000 people.

The organizers have yet to issue an official statement on the most probable crowd count within and outside the venue.

Still, regardless of the crowd count, the people enjoyed the concert featuring various artists such as Moira Dela Torre, Kim Chiu, Pokwang, Cherry Pie Picache, Jolina Magdangal, Ben & Ben, Rivermaya, and many others.

Immediately after the event, the venue was cleaned up by the participants themselves as well.