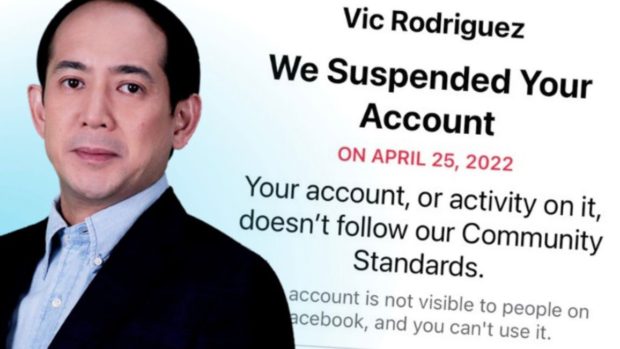 Atty Vic Rodriguez, shares a screencap of his suspended Facebook account, alleging the suspension was because he was for Ferdinand “Bongbong” Marcos Jr. Image from Atty. Vic Rodriguez

MANILA, Philippines — The Facebook account of Atty. Vic Rodriguez, the spokesperson of presidential candidate Ferdinand “Bongbong” Marcos Jr., was temporarily suspended, a move that he claimed was a form of “censorship” and an “interference on a sovereign act.”

In a Viber message on Tuesday, Rodriguez claimed his Facebook account was suspended on Monday because “I am for Bongbong Marcos.”

“FB (Facebook)/Meta suspended my account because I am for Bongbong Marcos. This is censorship of the highest degree and interference on a sovereign act,” he said.

He did not say which activity was flagged by FB.

Bongbong Marcos to Comelec: Ensure that votes are counted correctly