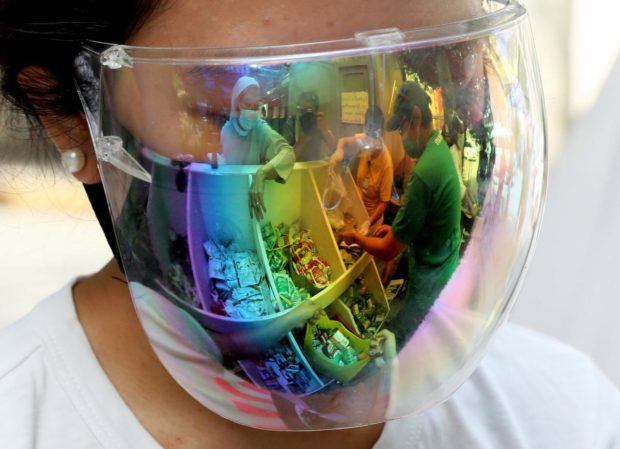 MANILA, Philippines — Voters do not have to present their vaccination cards or wear face shields at polling stations on May 9, Election Day, contrary to instructions shown in an old explainer video that is circulating on social media, according to the Commission on Elections (Comelec).

Sought for clarification regarding the TikTok video, Comelec Commissioner George Garcia on Saturday said there was “no need for vaccine card” and “no face shield required.”

Comelec rules, however, require that everyone wears a face mask at all polling centers.

The video was an excerpt from an episode of TV5’s “Frontline Tonight” shown in January. It suddenly went viral on the Chinese video-sharing app on Saturday.

It told viewers that they must wear face shields at voting centers and present a negative RT-PCR test if they are not vaccinated.

In February, the poll body issued a “new normal” manual which said that face shields are voluntary in areas under alert level 3 or lower. An earlier Comelec resolution required voters to wear face shields to be able to cast their votes. This resolution has not been amended as of Saturday.

Metro Manila and 88 other areas nationwide were placed until May 15 under alert level 1, the least restrictive quarantine classification.

In a letter to the Comelec on Saturday, veteran election lawyer Romulo Macalintal asked poll officials to take immediate action on the viral video, which he said “would cause confusion among the voters.”

The video had “suddenly resurfaced [and] is now going viral online via TikTok with very misleading information or wrong advisory regarding the requirements for voters in the May 9, 2022 elections,” wrote Macalintal, a legal counsel for the Vice President and presidential candidate Leni Robredo.

He said that the Comelec should urgently advise TikTok Philippines to take down the video and request a clarification and an advisory from the management of TV5 to inform the public that the video was not updated.

The video had over 700,000 views as of Saturday night. It was posted by TikTok user @rowrow.nov.03bbm2022. The post had the caption, “sana lahat ng uniteam supporters na botante ay na vaccine na” (hoping that all Uniteam supporters who are voters have been vaccinated).

Macalintal indicated that the distribution of the misleading video could be an election offense.

He cited a provision in the Omnibus Election Code, which said that an election law violator may be “any person who, for the purpose of causing confusion among the voters, propagates false and alarming reports or information regarding any matter relating to … the general conduct of the elections.”

A day earlier, Garcia tagged as “fake news” a message which was also circulating that said that deactivated voters may ask for reactivation through the Comelec’s IT department with only a few days left to vote.

As of April 28, the Comelec has distributed about 42 million voter information sheets, or 64 percent of the 65.7 million registered voters in the country.

Each information sheet has the voter’s name, address, polling precinct, place where he or she is registered as a voter, and simplified instructions on how to cast the ballot. It also includes the names of all the national and local candidates.

In addition to wearing masks, other COVID-19 mitigating measures are to be implemented at all polling stations, including physical distancing of at least 1 meter inside a voting center.

The Inquirer is listing these other rules and procedures to be followed by voters and election officers on Election Day which are based on various Comelec directives:

• Body temperature check: if your temperature is 37.5 degrees Celsius or higher, you will be examined by a health worker.

• If it is determined that you have a fever or if you show COVID-19 symptoms, you will be led to an isolation polling place where you can cast your vote away from other voters. Otherwise, you can proceed to the assistance desk where you will get your precinct and your sequence numbers.

• Go to your assigned precinct. You will be given a pen, a “secrecy folder” and your ballot, which you will accomplish by fully shading the oval appearing before the name of the candidate of your choice.

• Do not overvote. Overvoting, or shading more than the allowed number of candidates for the post, will invalidate all your votes for that position.

For instance, you can only vote for a maximum of 12 senators. If you shade 13 or more names of candidates, not one of your votes for any of them will be counted.

But if you undervote, or select less than 12 senators, the vote-counting machine will still count all those votes.

• Do not make unnecessary marks on your ballot so the vote-counting machine could read it properly.

• After you fill up your ballot, insert it into the vote-counting machine and check your voter’s receipt before depositing it in the receptacle.

• Return the ballot secrecy folder and the marking pen to the election board.

• An election officer is required to make an indelible ink mark on one of your fingers, normally the forefinger, to indicate that you have cast your ballot.

• Persons with a disability, senior citizens, and people who are illiterate can be assisted in filling up their ballots by a relative or another person who belongs to the person’s household like a caregiver or personal assistant who should be of voting age. —WITH A REPORT FROM INQUIRER RESEARCH

Palma to Cebuano faithful: Pray, reflect before casting your votes