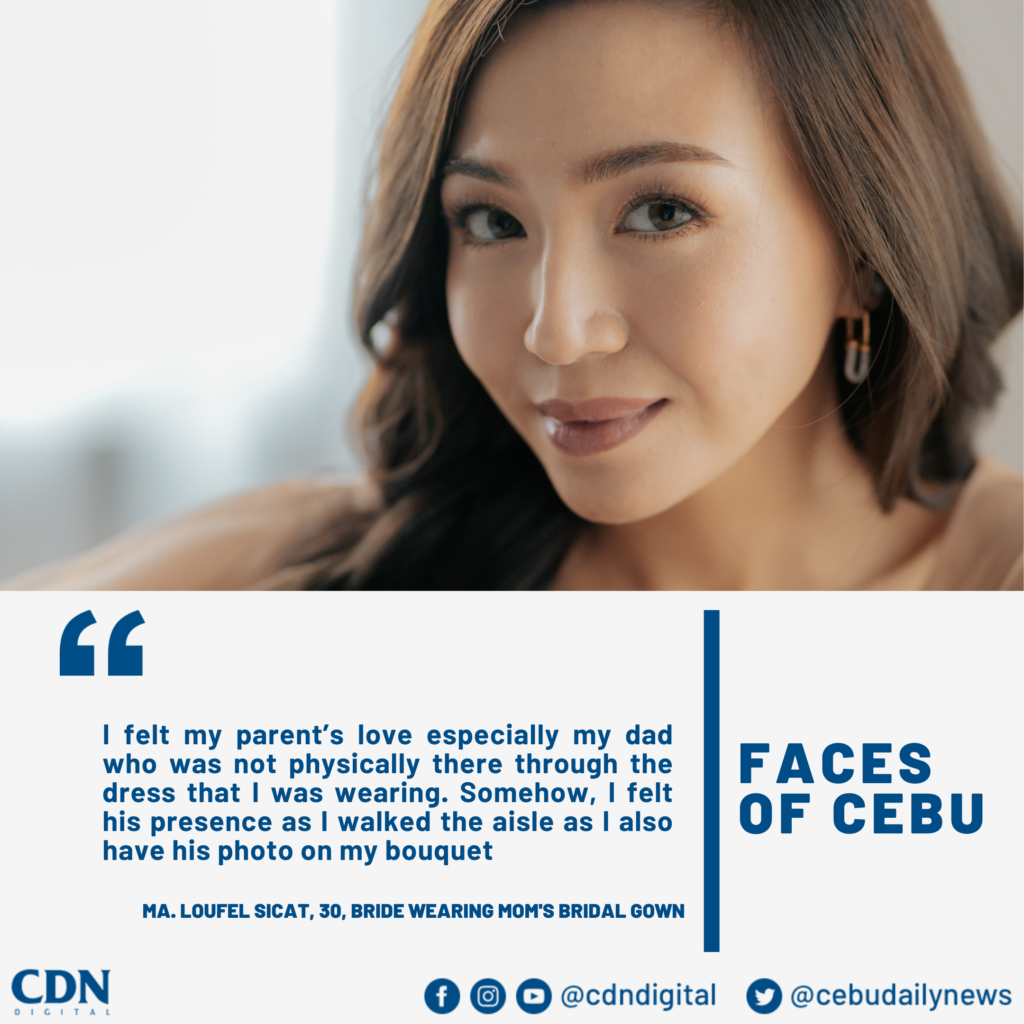 CEBU CITY, Philippines— Every little girl has tried putting on dresses of their mothers or aunts to play dress up.

But Ma. Loufel Pasaol Sicat from Danao City had her sights on her mother’s wedding gown since she was little. She dreamt that someday, she would be able to wear it to her own wedding.

That dream became a reality when the 30-year-old Sicat walked down the aisle wearing the 40-year-old wedding gown of her mother last April 11, 2022.

Sicat told CDN Digital how the gown meant so much to her and her family.

“I have always fancied my mother’s dress since I was little, I would often wear it at home even with the unique veil na my dad personally made for my mom (sadly the veil got badly discolored with time) playing dress-up,” she said.

She knew just minutes after getting engaged in 2019 that she had to wear her mother Marylou’s dress to somehow feel her late father, Felizardo’s presence.

“A few minutes later jud, when it started to sink in and I was starting to recover from the surprise proposal and after I called my mom and informed her of my engagement, I then realized na I will never have the father-daughter moment on my wedding day,” she said.

Sicat had one too many wishes on her wedding day. One was to wear her mom’s gown and the other one is to walk down the aisle with her parents. But unfortunately, her father couldn’t join her on her wedding day as he passed away in 2014.

A timeless piece! 😍😍 LOOK: Loufel Sicat had a very special way of honoring her late father, Felizardo. Loufel made…

But instead of feeling sad about the situation, she turned to the gown as a symbol of her father on her special day.

“Maybe because I am a Papa’s girl. After unexpectedly and painfully losing him last 2014, I wanted to beautifully honor him on my wedding and also to thank my mom for her unconditional love and strength for me and my sister. So while I was still abroad, I messaged my mom telling her of my intention of wearing her prized wedding dress on my own wedding, thankfully she gave me permission [to use it],” said Sicat.

During the most awaited father-daughter dance at the reception, Sicat opted to dance with her mother, sharing nothing but precious moments and memories that would last a lifetime.

Sicat had only little alterations with her mother’s gown with the help of Cebuano designer Lemuel Rosos.

“The alterations done by Sir Lemuel was shorten it till below my knee (he utilized the lace that he cut from the train of the dress on the hem and on the cuff). Sir Lemuel did not add any other fabric to the dress. He respected it and handled it with much care,” she said.

Now that the gown is with her, she hopes that it can survive the test of time so she, too, can hand it over to her daughter during her wedding day.

Sicat wants to share to all brides-to-be out there who may have lost a parent before getting married this simple message of comfort.

“I know how much this hurts. Most of us ladies have envisioned and planned our dream wedding since we were little and part of that dream is to spend that special day with all the people we love and treasure. But sometimes God and life has another plans.  Although they can’t be with us physically, the love and memories they left will be a beautiful reminder that whenever and wherever, no matter the occasion or the circumstance they are with us,” said Sicat.