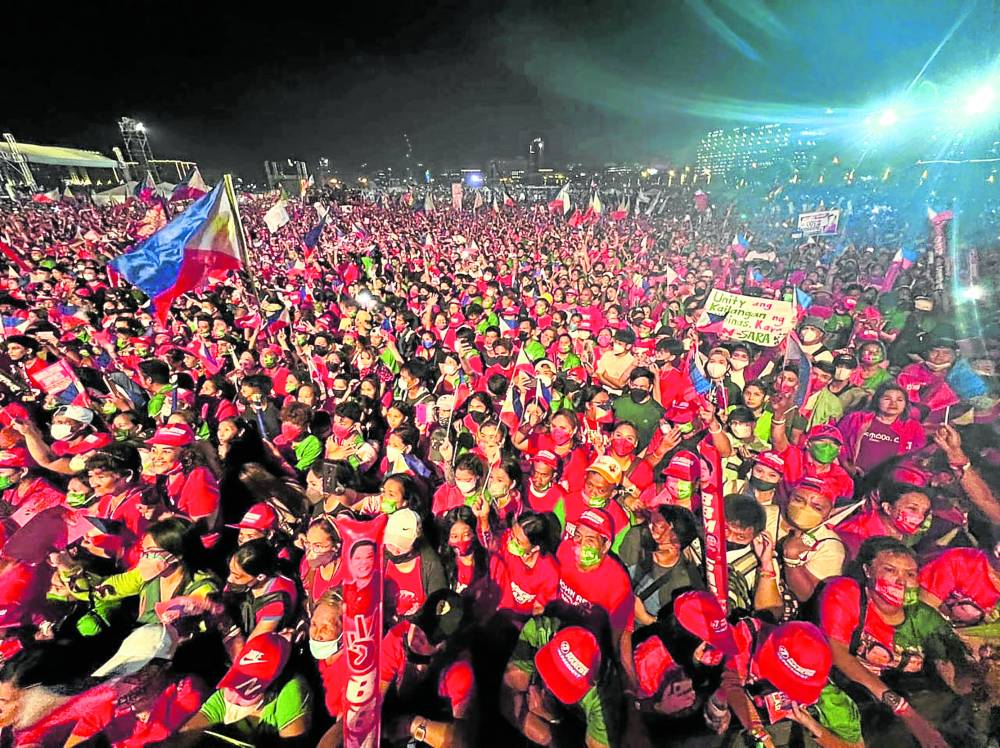 The presidential campaign of former Senator Ferdinand “Bongbong” Marcos Jr. reached its culmination with a grand rally at a sprawling reclaimed area in Parañaque City, with the survey front-runner carrying on his broad theme of “unity.”

There was talk of President Duterte’s participation in this finale, the third in a series of final rallies, or “miting de avance,” after Marcos and his running mate, Davao City Mayor Sara Duterte, went stumping in Guimbal, Iloilo, on Tuesday, and in Tagum City, Davao del Norte, on Thursday.

According to Marcos Jr., Mr. Duterte was invited to the rally, but the President did not show up.

“Of course, he is invited,” the former senator said in an interview with radio station dzRH on Saturday morning.

In November last year, Mr. Duterte criticized Marcos Jr. as a “weak leader” and a “spoiled child.” He had also expressed dismay about his daughter’s sliding down to the vice presidential race in Marcos Jr.’s favor, despite a strong showing in the presidential surveys.

But on Friday, in an interview with his spiritual adviser Apollo Quiboloy, the televangelist accused of sex trafficking and other crimes in the United States, the President made a sudden change of tune, saying that Marcos Jr. lived a “simple” life.

Mr. Duterte also made a false statement that the government had found no ill-gotten wealth linked to the Marcos family.

Even with no presidential endorsement forthcoming, Marcos Jr. has expressed satisfaction with the backing of Mr. Duterte’s party, the PDP-Laban—the party formed originally to oppose his father, the late strongman Ferdinand Marcos.

“It was a grueling yet a very satisfying campaign. We could not have completed this without the stewardship of presidential frontrunner Bongbong Marcos and the overwhelming support and unconditional love from all the supporters of the BBM-SARA UniTeam,” Rodriguez told the Inquirer. Various celebrities entertained the crowd who were mostly wearing red, the campaign color of both Marcos Jr. and of his father during his time.

Marcos Jr. and his running mate appeared on stage shortly after 10 p.m., drawing cheers from supporters who had been waiting since noon.

Among them was Susanita Tesiorna, 68, of Bacoor, Cavite, a labor leader associated with the Trade Union Congress of the Philippines.

Tesiorna said she was 17 when the older Marcos declared martial law in 1972.

She affirmed that period as a good time for the country and said Marcos Jr. had “nothing to apologize for” regarding his father’s rule.

Marcos Jr. delivered a 20-minute speech, interrupted by chants of “Nanalo ka na, nanalo ka na” (You’ve won, you’ve won).He said no one should sleep on Election Day because another cheating might happen.

The former senator continued to insist that he was cheated in the vice-presidential contest in 2016, despite his electoral protest leading to the Supreme Court’s ruling last year in favor of his rival, Leni Robredo.

Marcos Jr. still did not disclose much in his speech about his plans should he win, as he stuck to his theme of unity.

“On Monday, remember what future you want for the Philippines. With this mindset, we are hoping that you will choose UniTeam because it is only from UniTeam that you heard about unity,” he said.