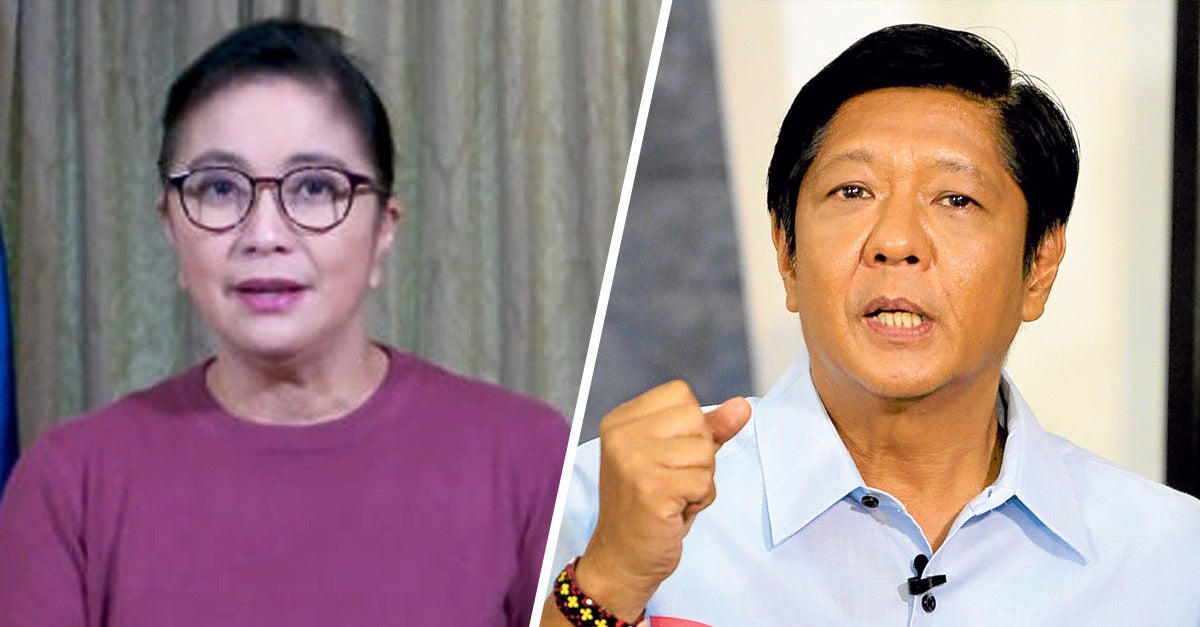 With just 10 days left before the May 9 general elections, Vice President Leni Robredo on Friday issued her strongest challenge yet to her main rival for the presidency, former Sen. Ferdinand “Bongbong” Marcos Jr., daring him to a one-on-one televised debate.

“We owe it to the people and to our country,” she said. “If he agrees, anytime, anywhere, I will be there.”

Robredo said the debate would “give the Filipino people a chance to face him and ask him questions, particularly those regarding the many controversies surrounding him,” she said.

Robredo hurled the challenge at Marcos as she turned down an invitation from the Commission on Elections (Comelec) for a panel interview in lieu of the debate, which was scrapped following the nonpayment of the venue by the poll body’s debate partner. (See related story on Page A5)

“In all the Comelec invitation [for debates], he’s the only who has yet to face [the public],” Robredo told reporters after speaking at a multisectoral gathering here.

“It’s his responsibility not only to disclose his platform [of government], but also address the issues against him,” she said.

Not going to happen

Marcos did not himself respond to the Vice President’s challenge.

“On the debate challenge on presidential front-runner Bongbong Marcos, this will never happen due to several reasons and Mrs. Robredo knows these reasons,” his spokesperson Victor Rodriguez said.

He did not elaborate.

Rodriguez said Marcos and Robredo had different ways of conveying their campaign messages to the public.

“The UniTeam of Bongbong Marcos is using positive campaigning as its guide and our message goes straight to the public, including our call for unity. The yellows are using negative campaigning, deception and mudslinging,” he said.

It would be a “huge relief” for Filipinos to see candidates calmly campaigning instead of fighting against each other, Rodriguez said.

Time to give answers

Robredo said it was high time for the son and namesake of the ousted dictator to answer the allegations thrown at him amid the spread of disinformation and fake news.

A study done by tsek.ph showed that Robredo was the “biggest victim” of disinformation on social media platforms while Marcos was the primary beneficiary of misleading stories and posts.

“He should be asked upfront so that his supporters would know what’s really the truth because many have been deceived by the lies,” Robredo said.

“The people should have the opportunity to confront him about this,” she added. “For me, it’s our responsibility as candidates to present ourselves to the people.”

The Supreme Court has ruled that Marcos’ late father and mother, Imelda, illegally amassed cash and assets during their 20-year rule, way beyond their legitimate income which the tribunal said was equivalent to only about $304,000 for all the time they were in power.

This ill-gotten wealth includes over $600 million in Swiss bank deposits that were recovered by the Philippine government. But over the years after they were driven out of Malacañang in 1986, fact-checkers had found fantastic stories of a massive gold hoard acquired by the dictator when he was a lawyer to explain his wealth.

Other tales include the so-called “Golden Age” of the Philippines during the Marcos administration, which has been questioned by both historians and economists, who point to poverty, corruption, cronyism and widespread human rights violations during the dictatorship.

The Bureau of Internal Revenue is trying to collect about P203 billion in estate tax from the Marcos family. The presidential aspirant, who is an administrator of the estate, has repeatedly ignored questions from the press on when they would pay the tax.

In a separate statement, Robredo said she had participated in almost all the major debates and interviews hosted by the Comelec, private groups and media organizations to present her plans for the country should she win as President Duterte’s successor.

Instead of taking part in the panel interview that the Comelec had organized in lieu of a debate among the 10 presidential candidates, she said she would just join her volunteers in the homestretch of the campaign.

“At this point of the campaign, there is only one candidate who has yet to face the nation in a debate that includes all the other candidates,” the Vice President said.

By taking part in a debate with all his opponents, Marcos will allow voters to “take a closer look at his track record, character and platform, and to see how he truly measures up compared to other candidates,” Robredo said.

Her running mate, Sen. Francis “Kiko” Panglinan, also challenged Marcos’ vice presidential candidate, Sara Duterte, to a debate, saying that the two who are seeking the highest posts in the country have been absent in the Comelec debates.

Comelec installs 10 podiums for debate even if Marcos Jr. won’t show up

Read Next
Sotto gets support of Cebu 7th District mayors