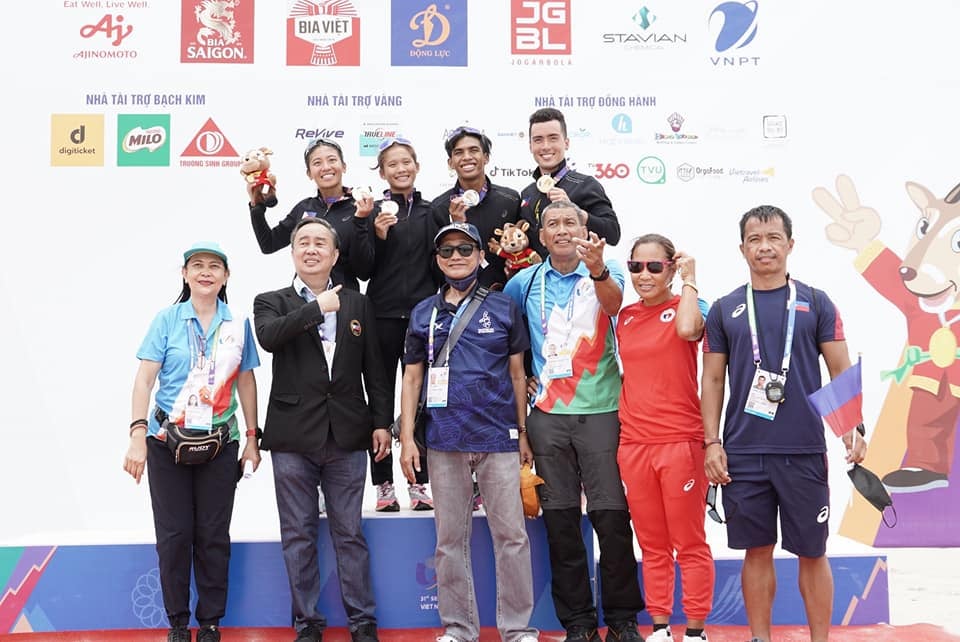 The 22-year-old Remolino duplicated his silver medal finish in the 2019 SEA Games held at the Subic Freeport Zone in Zambales by clocking in 1 hour, 59 minutes and 16 seconds.

Fernando Casares also of the Philippine Team topped the men’s division at 1:56.57 after the grueling 1.5-kilometer swim, 40km bike, and 10km run.

Indonesia’s Ronald Bintang Setiawan bagged the bronze medal in the men’s division at 2:01.45 while another Indonesian Aloysius Mardian grabbed the fourth spot closely at 2:02.59.

In the distaff side, 18-year-old Alcoseba showed a glimpse of what she’s capable of after earning the bronze medal by finishing the race at 2:18:30 behind three-peat champion Marion Kim Mangrobang.

Mangrobang finished the race at 2:13.31 while Indonesian Inge Prasetyo trailed her at second place at 2:16.38 to earn the silver medal.

Alcoseba, a former varsity swimmer of Dela Salle University who turned into a triathlete showed a lot of promise in her first SEA Games stint.

Probably the proudest person right now for Remolino and Alcoseba’s medal-clinching performances is no other than their head coach Roland Remolino.

Remolino, who is the father of Andrew Kim, told CDN Digital that he was extremely proud of his two prized wards, despite becoming wary of the Indonesian triathletes whom he believed were already catching up with the Filipino triathletes.

(In truth, Kim and Raven struggled against the Indonesian triathletes, who have grown stronger. There are triathletes from Singapore and Thailand, who are slowly catching up with us. But I am so proud and happy with them.)

Andrew Kim and Alcoseba are also members of the Talisay Luigi Triathlon Group (TLTG)-Go For Gold in Talisay City, Cebu.

According to Remolino, the Indonesian triathletes almost caught up with Alcoseba during the bike race, however, the latter managed to maintain her pace until reaching the finish line.

(My assessment on their performance, Kim is 90 percent with the great performance he showed and Rama is 88 percent. We cannot know if they can reach 100 percent  because the competitors have really grown stronger. But I am happy that we achieved our target, which we really worked hard for in training for how many months.)