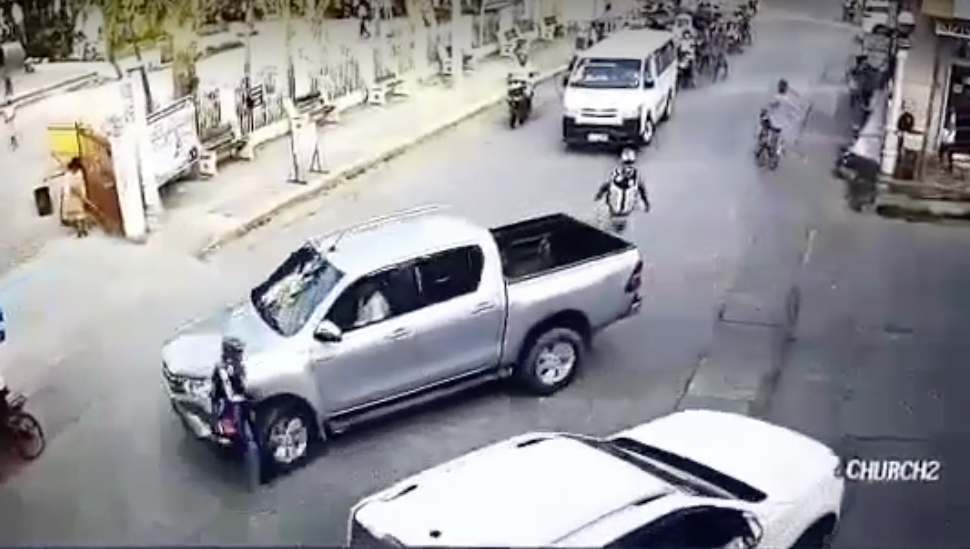 This screengrab from a video shared to CDN Digital shows the moment a traffic enforcer was hit by a pickup truck in Balamban town, western Cebu on Wednesday, May 18, 2022. | via Paul Lauro

CEBU CITY, Philippines–A traffic enforcer sustained injuries after he got hit by a pickup truck while manning traffic in an intersection in Balamban town, western Cebu on Wednesday afternoon, May 18, 2022.

According to a police report, traffic officer Jovey Ramos sustained injuries after he got hit by a pickup truck driven by Bernardo Gorgonio Ricafort along the intersection in front of the St. Francis de Assisi Church in Barangay Baliwagan at around 5 p.m.

The 37-year-old victim, who is a resident of Barangay Cambuhawe in Balamban, suffered serious physical injuries in different parts of his body, according to the police report, and was immediately brought to the Balamban Provincial Hospital for immediate medical treatment.

The 55-year-old Ricafort, meanwhile, was said to be under the custody of the Balamban Police Station for filing of appropriate charges, based on the spot report.

Initial investigation conducted by the responding police officers revealed that the vehicle driven by Ricafort was making a left turn when it accidentally sideswiped the  traffic enforcer who was manning the traffic in the area.

As result of the impact, the traffic enforcer fell and suffered serious physical injuries in different parts of his body, the report said.