CEBU CITY, Philippines – The Mandaue Causeway Road in the North Reclamation Area is now officially named Ouano Avenue after the signing of a supporting law.

President Rodrigo Roa Duterte signed RA 11730 on April 29, 2022, officially naming the Mandaue Causeway as Ouano Avenue, to honor the Ouanos who have been serving the Mandauehanons since the early 1900s.

The length of Ouano Avenue is 2.489 kilometers. It runs from the corner of SB Cabahug St. to Tipolo Creek in Barangay Centro and the Mandaue Reclamation Area, then up to the bridge over Mahiga Creek at the Cebu International Port.

RA 11730, however, specified that  Don Andres Soriano Avenue, fronting the existing Mandaue City Cultural and Sports Complex, will not be a part of the Ouano Avenue consistent with Mandaue City Ordinance No. 97/005 promulgated on March 7, 1997. 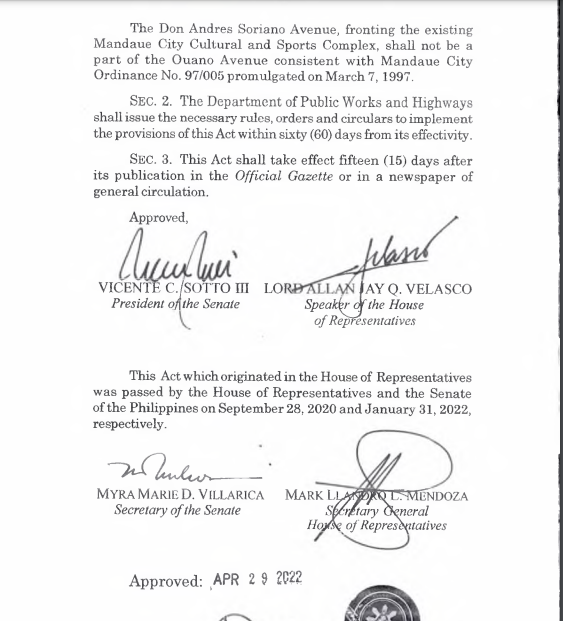 Among the members of the Ouano political clan that served Mandaue City were Alfredo “Pedong” Ouano who served as City mayor between 1988 to 1998 and Thadeo “Teddy” Ouano who was also City Mayor from 1998 until 2007.     /rcg

Read Next
The beauty and strength one can have underwater