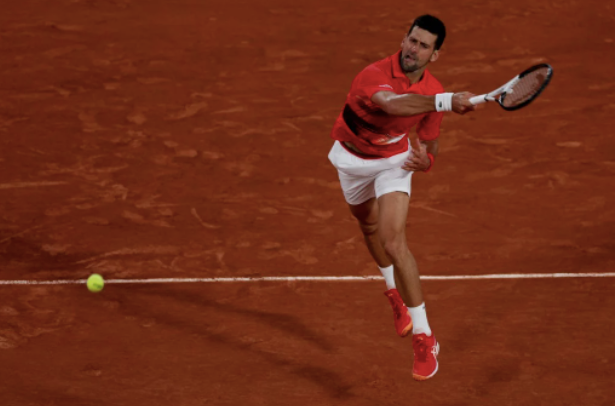 Serbia’s Novak Djokovic returns the ball to Japan’s Yoshihito Nishioka during their men’s singles match on day two of the Roland-Garros Open tennis tournament at the Court Philippe-Chatrier in Paris on May 23, 2022. (Photo by Thomas SAMSON / AFP)

Novak Djokovic and Rafael Nadal aim to take another step Friday towards a blockbuster quarter-final clash at the French Open, while Carlos Alcaraz targets a place in the last 16 after surviving a match point in the previous round.

World number one and defending champion Djokovic has eased through the first two rounds in his first Grand Slam since last year’s US Open final defeat. He next plays Slovenia’s Aljaz Bedene.

“I’m just glad to play the way I have been playing the first two rounds,” said Djokovic, chasing a record-equalling 21st major following his high-profile deportation ahead of the Australian Open in January.

“Everything is going in the right direction. I’m looking forward to the next challenge.”

The Serb has reached the last eight or better in each of his past 12 visits to Roland Garros, and accounts for two of Nadal’s mere three defeats on the clay in Paris.

Nadal continues his push for a 14th French Open crown against Dutchman Botic van de Zandschulp, a quarter-finalist at Flushing Meadows in 2021.

The Spaniard earned his 300th Grand Slam win by beating French wildcard Corentin Moutet in straight sets in round two. He is 107-3 at Roland Garros.

“Preparation hasn’t been perfect, so I didn’t anticipate a perfect start to the tournament. But I have been quite well,” said Nadal.

He began the year on a 20-match winning run including his triumph in Melbourne, but is without a title on clay this season after missing time with a rib injury and then suffering a recurrence of a foot problem.

“I can’t try to go very deep in the tournament if I am worried about my physical issues every single day,” said Nadal.

“So if something happens, it happens and I’m going to accept it, but for the moment I am focused on the tennis.”

After saving a match point in a thrilling five-setter against countryman Albert Ramos-Vinolas, Spanish teenage star Alcaraz goes up against the only player to beat him on clay this season, Sebastian Korda.

“I believe in myself, and of course I work hard every day,” said the 19-year-old.

“You have to have a good goal, good dreams. Of course trying to follow your dream. Work hard every day. I think that’s the secret.

Alexander Zverev, the third seed and 2021 semi-finalist, was also staring at defeat in the second round against Sebastian Baez, saving a match point on serve at 4-5 after fighting back from two sets down.

The German Olympic champion meets Brandon Nakashima of the US who is enjoying his best Grand Slam run on his Roland Garros main-draw debut.