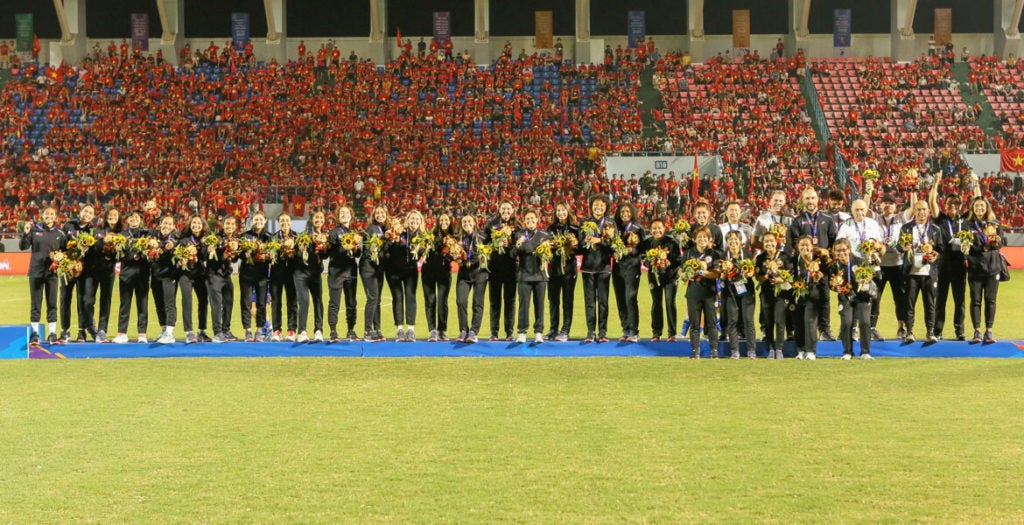 The Philippine Women’s National Football Team (PWNFT), Filipinas, pose for a group photo during the awarding ceremony of the SEA Games women’s football in Vietnam. | Photo from PFF Website

CEBU CITY, Philippines — The Philippine Women’s National Football Team (PWNFT) or the Filipinas got slotted to Group A of the upcoming ASEAN Football Federation (AFF) Women’s Championship 2022 on July 4 to 17, 2022 and will be held in various venues around the National Capital Region (NCR).

The Filipinas will be among the 11 teams from ASEAN member countries to compete in the major regional tournament.

They are slotted in Group A along with three-time AFF Women’s champion Thailand which recently finished with a silver medal in the 31st Southeast Asian Games in Vietnam.

Included in Group A is powerhouse Australia that will be co-hosting the FIFA Women’s World Cup next year. The rest of Group A includes Indonesia, Malaysia, and Singapore.

The Filipinas had a promising run in the 31st SEA Games after finishing with a bronze medal after 37 years. They defeated Myanmar, 2-1, in the bronze medal match last May 21, 2022 at the Cam Pha Stadium in Vietnam.

The bronze medal for the Filipinas served as the highest finish for the team in the SEA Games women’s football tournament. It also served as their second highest achievement after qualifying for the FIFA Women’s World Cup when they reached the semifinals of the Women’s AFC Asian Cup 2022 in India last January.

This serves as the last remaining major tournament for the Filipinas this year after the Guangzhou Asian Games in China was postponed due to the uptrend of the COVID-19 there.

Players such as Sarina Bolden, Quinley Quezada, Hali Long, Olivia McDaniel, Tahnai Annis, Anicka Castañeda, and Isabella Flanigan, who shone during the bronze medal finish in the SEA Games, are likely going to suit up for the team in the AFF Women’s Championship 2022.

The team will still be coached by Aussie Alen Stajcic.