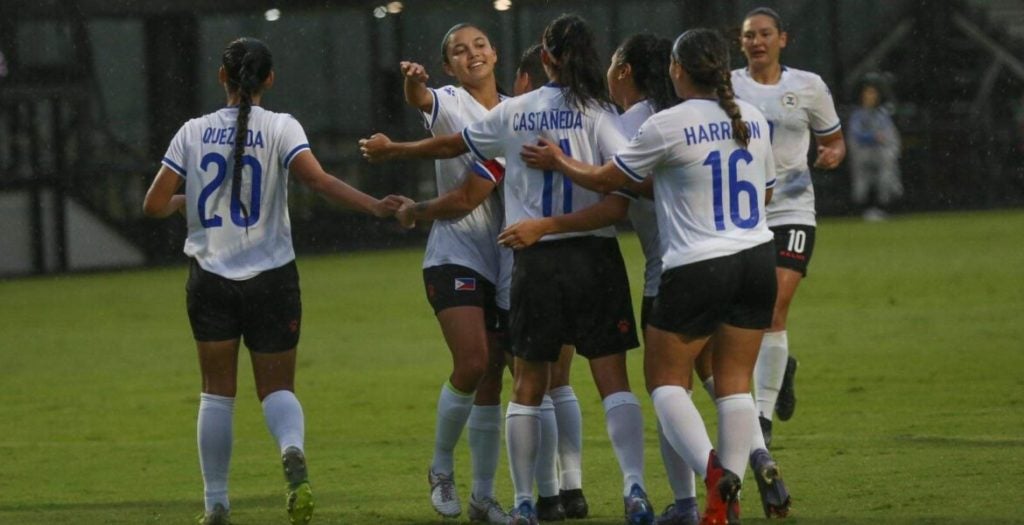 The PWNFT Filipinas celebrate after scoring one of their seven goals versus Fiji in their friendly match on Thursday in Australia. | Photo from PFF Website

Team captain Tahnai Annis, Quinley Quezada, and Anicka Castañeda each scored a brace or two goals for the Filipinas while Dominique Randle chipped in one goal for their dominating win.

The Filipinas are currently in Australia to prepare for the 31st Southeast Asian Games (SEAG) in May in Hanoi, Vietnam. Part of their preparation is the friendly matches with Fiji.

Quezada who turned 25 on match day made her birthday extra special with her brace, including the Filipinas’ first goal in the 13th minute from her shot near the post. Quezada tallied her second goal in the 79th minute by sliding the ball in from the bottom corner.

Castañeda’s brace was tallied in the 17th minute from an excellent cross pass from Malea Cesar coming from the right flank. She scored her second goal in the 44th minute.

Meanwhile, Annis scored her brace for the Filipinas in the 40th and 43rd minutes of the match. Randle scored her lone goal in the 34th minute.

“The result was one thing but we’re looking at our performance. There were some good patches, some good moments, but we were a bit rusty in some parts just because the players were out for two months, not training in a team environment. Overall, it’s a good starting point for us,” said the team’s head coach Alen Stajcic.

Jefferson Cheng, the Filipinas’ team manager agreed to what Stajcic said that despite their dominating performance, it was still a tough match for the team.

“It was a tough match in tough conditions. I’m happy for the team for the good result. We’ll keep working hard,” said Cheng who thanked the Filipino community who came out to support the Filipinas amidst the drizzle during the match.

The Filipinas which qualified for the 2023 FIFA Women’s World Cup will face the Fijians anew on Monday, April 11, 2022.