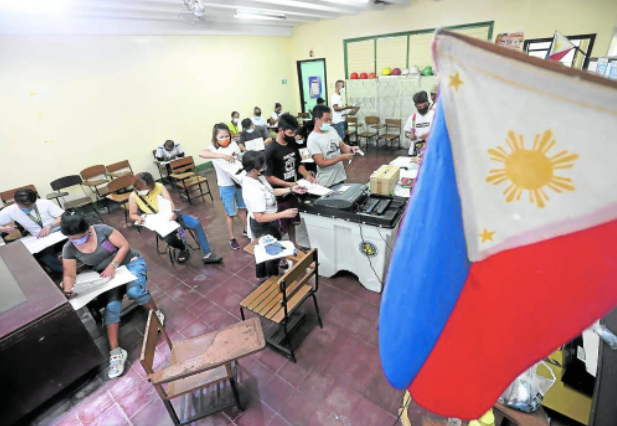 Technical problems, long lines, and flaring tempers mark voting in many polling centers across the country on Monday (May 9) but overall the national and local elections went smoothly, with pandemic restrictions observed, like at Aurora Quezon Elementary School in Quezon City. —MARIANNE BERMUDEZ

MANDAUE CITY, Philippines — The Commission on Elections in Mandaue City (COMELEC-Mandaue) is getting ready for the barangay and Sangguniang Kabataan (SK) elections scheduled on December 5, 2022.

Lawyer Michael Angelo Sarno, Comelec-Mandaue Election Officer, said they received a memorandum from the central office, directing them to conduct an inventory of supplies and registration forms for the opening of the voter registration period.

Sarno said they already informed the central office that they have already run out of registration forms.

He said that the election and turnouts will be conducted manually.

Sarno said despite rumors about the suspension, they will continue to prepare for the election unless there is a law suspending it.

A bill pending in the House of Representatives has proposed that the elections be moved to 2024 to save funds that could be used for the government’s COVID-19 response.

Under the law, barangay officials will only have a three-year term limit.    /rcg

Voters registration suspended while Cebu is under MECQ