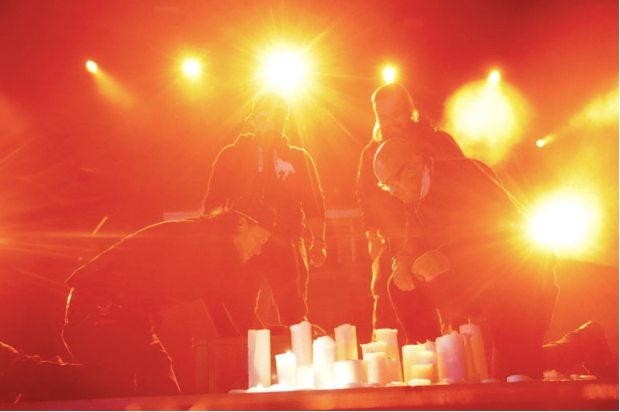 Logistics workers light candles on the stage of the Estero Picnic festival during a tribute paid to the drummer of the band Foo Fighters Taylor Hawkins who died in Bogota, Colombia, March 25, 2022. Image: Reuters/Nathalia Angarita

American rock band Foo Fighters will play two tribute concerts for their late drummer Taylor Hawkins, taking to the stage in London and Los Angeles in September, the group said on Wednesday.

Hawkins, 50, died unexpectedly in late March in a Bogota hotel during the group’s South American tour, the rest of which was subsequently cancelled.

The concerts, which will take place at London’s Wembley Stadium on Sept. 3 and Los Angeles’ Kia Forum on Sept. 27, will be the first Foo Fighters live performances since Hawkins’ death.

“For our dear friend, our badass bandmate, our beloved brother… Foo Fighters and The Hawkins family bring you the Taylor Hawkins Tribute Concerts,” the band said in a post on Twitter, announcing the gigs.

It also shared a statement from Hawkins’ wife Alison, who thanked fans for their support.

For our dear friend, our badass bandmate, our beloved brother…Foo Fighters and The Hawkins family bring you the Taylor Hawkins Tribute Concerts. https://t.co/8gNTw2uxWl pic.twitter.com/N8mDZgJ2kk

At the time of Hawkins’ death, Colombia’s Attorney General said an initial analysis including toxicological tests had found 10 types of substances, including THC found in marijuana, tricyclic antidepressants, benzodiazepines and opioids. It did not give a cause of death or say what volume of substances had been found in the analysis. It said it would continue with its investigation.

In a statement, the band said the tribute concerts would also feature music artists who had inspired Hawkins, and together with the group they would perform “the songs that he fell in love with, and the ones he brought to life.”

Foo Fighters was founded in 1994 by Dave Grohl, the drummer for grunge band Nirvana, following the death of Nirvana’s lead singer Kurt Cobain. Hawkins joined in 1997.

The group has won 15 Grammy Awards, the last three this year shortly after Hawkins’ death. DC