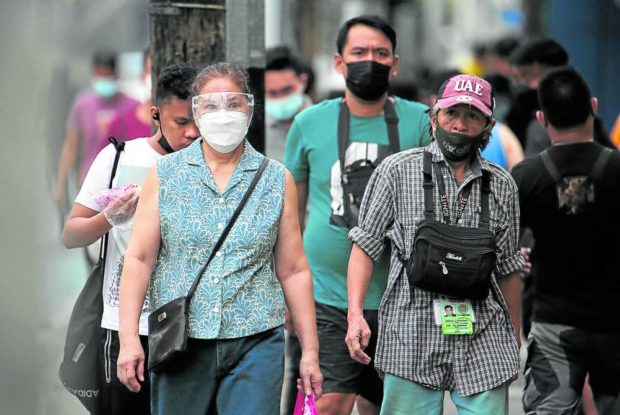 The Department of Health recommends the wearing of face masks until the end of the year. —NIÑO JESUS ORBETA

MANILA, Philippines — The Department of Health (DOH) on Wednesday recommended the wearing of face masks until the end of the year.

Health Undersecretary Maria Rosario Vergeire said face masks protected people not only from COVID-19 but from other diseases as well.

“You know the mask did not only protect us against COVID-19. It also protected us from other respiratory infections, even with this monkeypox. This disease, we can be protected from monkeypox by just wearing the mask,” she continued.

Meanwhile, Vergeire criticized the provincial government of Cebu’s move to lift the wearing of masks rule while in open and outdoor spaces of the province.

Vergeire reiterated that face masks may be removed only when a person is eating or exercising.

She added that while current protocols are “not very specific,” people can remove their masks when they are alone or far from other individuals outside such as when hiking or going to the beach.

Vergeire then pointed out that issuing an executive order to lift the mask mandate is very risky.

“So, this is something that would be perceived na baka pwedeng maluwag na maluwag na dito sa ating lugar (as their place is already relaxed from restrictions) and that might be so risky for their population,” the undersecretary went on.

President Rodrigo Duterte earlier said face masks will be worn until the end of his term on June 30.

It’s mask on in Cebu as IATF rule to prevail, says DOJ chief