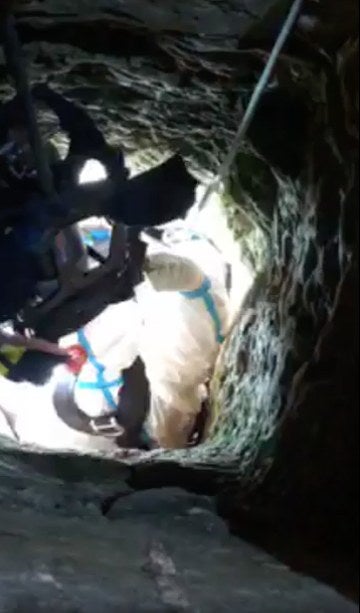 Personnel from Lapu-Lapu City’s Disaster Risk Reduction and Management Office retrieved Friday night, June 17, the body of a 47-year-old woman that was dumped in an abandoned well in Sitio Guisi in Barangay Agus.

CEBU CITY, Philippines — Lapu-Lapu City police continue their manhunt for the suspect in the killing and dumping of a woman in an abandoned well last June 17 in Sitio Guisi, Barangay Agus, here.

Police Major Aibert Samson, chief of Marigondon Police Station, said that his men are pursuing a certain location today, June 24, 2022, after they received information of the suspect’s possible presence there.

Police begged off to name the suspect for now as well as his possible location.

Samson said that they already received the copy of the autopsy and the result showed that Winnie Pepillero died of multiple stab wounds on her neck and trunk.

Pepillero also had lacerations on her face.

Samson said that they already have witnesses that pointed to the suspect as behind the gruesome killing. Witnesses reportedly told police that the victim and the suspect had a confrontation prior to the incident.

Others also told the police that they saw the suspect carrying a sack toward the abandoned well before the victim’s body was extricated.

If anyone has seen the crime when it was committed, Samson said there was none.

LOOK: Body of woman dumped in an abandoned well in Lapu-Lapu City

Samson added that they also do not have any security cameras from the crime area since the bunkhouse was located at the back of the subdivision.

Samson said that they also located the suspect’s family who told them that they already lost track of the suspect since he left Zamboanga Sibugay three years ago.

The family, too, has no pictures of the suspect.

The Marigondom police chief said that this case is already under regular filing and that the family is yet to file a formal complaint.

If a formal complaint will be filed, Samson said that they will wait for the issuance of a warrant of arrest from the court.

Read Next
Kai Sotto vows to keep going despite going undrafted: ‘The dream is always the NBA’