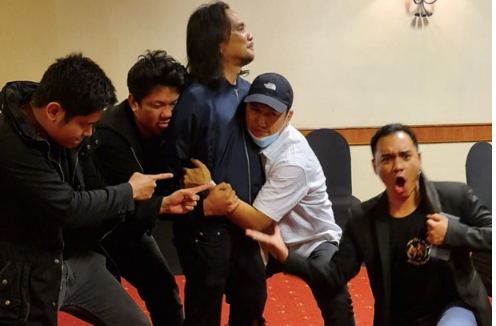 LILY, the band formerly known as Callalily, is searching for a name for its new vocalist, a week after its former vocalist, actor-musician Kean Cipriano, revealed that he is “moving on” after 17 years with the band.

(Help. We are [thinking] of a good name for the vocalist who will [replace the old one], a name which sounds like that of someone who will stay. Please give your suggestions.)

While there were no official announcements from the band, LILY apparently found its new vocalist, musician-vlogger Kevin Hermosada, who went on a gig with the band earlier this month. The band also showed a photo of Hermosada on its Facebook page on Monday, June 27.

(Kevin Hermosada is a good vocalist but he eats too much. You might grow too much by doing that, brother.)

The band — composed of Lem Belaro, Aaron Ricafrente, Nathan Reyes and Alden Acosta — previously released its new name and official logo which marks “a new beginning” for its members. Prior to this, Cipriano admitted that he and his former bandmates are not okay, adding that a Callalily reunion is not going to happen.

Callalily, which rose to fame in 2005, is known for its songs “Magbalik,” “Susundan” and “Pansamantala,” among others. JB