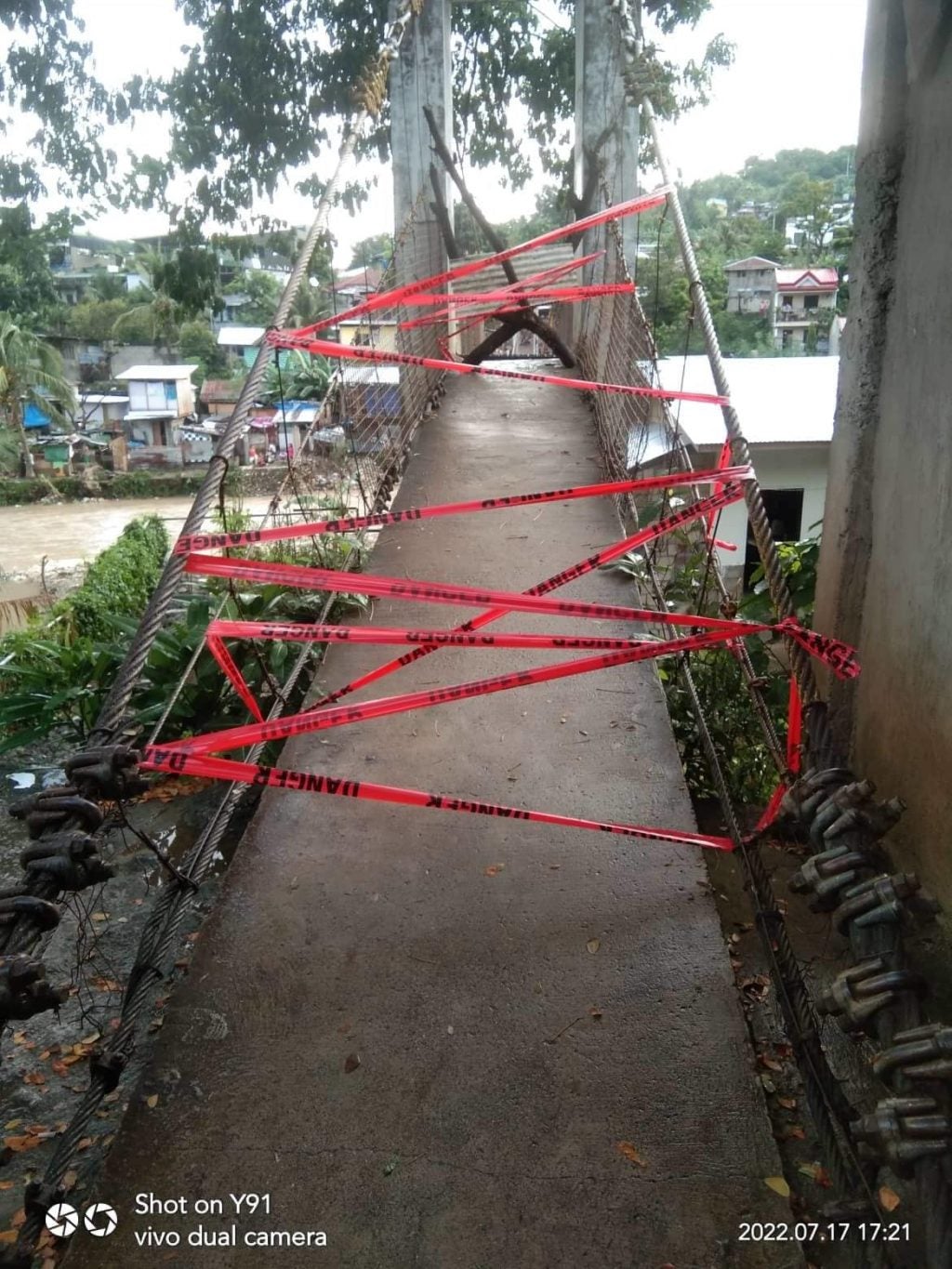 A hanging bridge connecting Barangay Lagtang and Lawaan 3 is temporarily closed after the incident that hurt two teenagers on a rainy Sunday afternoon, July 17, 2022. | Photo courtesy of CT-TODA

CEBU CITY, Philippines — Two minors, a 12-year-old boy and a 13-year-old girl, were rescued and rushed to the hospital after they fell off a hanging bridge in Barangay Lagtang, Talisay City and into the onrushing waters of a river at the height of the downpour this afternoon, July 17, 2022.

Jonathan Joy Tumulak, chief of the City of Talisay Traffic Operations and Development Authority (CT-TODA), said the two victims were among a group of 10 to 15 minors, who went to the bridge to watch the flood of water rushing in the river below at past 4 p.m. on a rainy Sunday in Barangay Lagtang.

He said the accident happened when apparently a cable supporting the bridge loosened causing the bridge which is made of wood and cables, to tilt to one side.

Most of the minors on the bridge except the two victims managed to scramble to safety.

Tumulak said that the bridge was 10 feet from the river below.

(The accident happened at the height of a downpour. The kids, more or less 10 to 15 of them, were at the hanging bridge watching the flood of water below the bridge before this happened [accident]. One cable on the bridge suddenly gave way, this was on the Lawaan 3 side.)

According to Tumulak, they received the alarm at 4:20 p.m. and they immediately called an ambulance, and they (CT-TODA personnel) were the first to respond there and rescue the victims.

The hanging bridge is not passable for now after this was cordoned for everyone’s safety.

Tumulak said that they immediately informed the village captains of the these barangays regarding the incident.

Some village watchers or barangay tanods are ensuring that no one passes through the bridge for now.

For his part, Lawaan 3 Barangay Captain Regie Marababol said that the hanging bridge had been used by the public for about 15 years or more.

Marababol said that last year, 2021, they requested that this hanging bridge must be checked by the city’s Department of Public Works and Highways engineer.

He said that this was actually inspected at that time.

(With the many kids hanging out there, sometimes, when it is raining or at night, we would tell them not to stay there. So what happened earlier, because of the many kids at the height of the rain on the bridge, one of the cables gave way, because only a small part of that cable was still connected to the foundation. That is why the kids fell.)

He also added that this was the best access for the residents to reach Barangay Lagtang and vice-versa. This is also a practical way for the public to save money as they would only walk instead of paying for transportation to go to the next barangay.

The bridge is closed until further notice.

After this incident, Marababol appeals to the residents to always be careful, especially if there is a heavy downpour to avoid further accidents from happening.

He was not only limiting to what just happened but also with possible flood and landslides in the area.