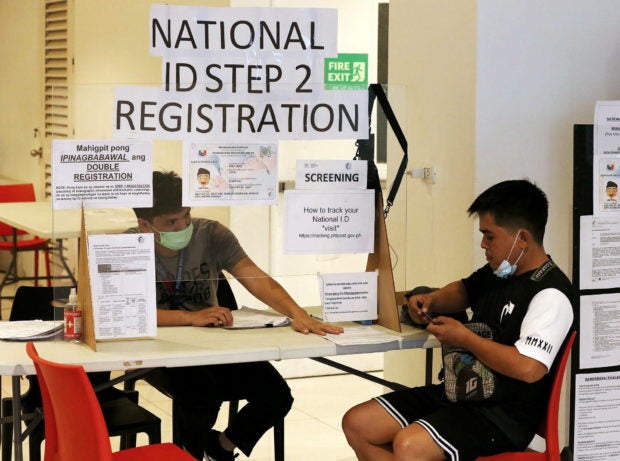 A man applies for national identification at Lucky Chinatown in Manila. (Photo by RICHARD A. REYES / Philippine Daily Inquirer)

MANILA, Philippines — Amid complaints over the delayed release of national IDs, the Philippine Postal Corp. (PHLPost) on Monday sought to assure the public that it is doing its part by promptly delivering the cards in its possession.

Postmaster General and PHLPost CEO Norman Fulgencio on Monday said the government corporation has already sent out 95 percent of the 14.8 million IDs due for delivery as of the first week of July.

But the 14.03 million so far delivered to the public is only 21 percent of the 68.3 million registrations tallied by the Philippine Statistics Authority (PSA), the chief implementer of the Philippine Identification System (PhilSys) project.

He said the delivery of the remaining 767,000 IDs is ongoing.

His report about the progress in the delivery of the IDs comes amid complaints about their overdue release, which prompted President Marcos last week to order the National Economic and Development Authority to expedite not only the delivery but even the printing of the IDs.

The estimated 68.3 million Filipinos who have registered so far to avail themselves of the IDs, also called Philippine IDs, or PhilIDs, is 74 percent of PSA’s target of 92 million registrations.

In a report last year, the Commission on Audit (COA) flagged the Bangko Sentral ng Pilipinas (BSP) — which had entered into an agreement with the PSA to produce the IDs — for its failure to release at least 36 million cards to the PSA, which should then hand over the IDs to PHLPost.

The COA said this caused a “ripple effect” which further delayed the PhilSys project.

According to Fulgencio, PHLPost makes it a point to promptly deliver the IDs it receives from the PSA, adding that the delivery will not even take six months as claimed by some netizens.

“We deliver it once we receive it from the PSA, and it won’t take six months. It may take a maximum of 30 days if we are delivering it to far-flung areas, depending on the volume. But we don’t receive millions of IDs per day, so we deliver [them] promptly,” he said.

Another concern about the new IDs is the refusal of banks to recognize that document, which has prompted the BSP to notify the banks that they must accept the IDs as sufficient identification.

The IDs are intended, among other purposes, to facilitate the public’s various transactions with the government as well as with private institutions.

That objective is in line with Executive Order No. 162, which Mr. Marcos’ predecessor, Rodrigo Duterte, issued in February, directing all government agencies and other institutions concerned to recognize the IDs, as presented by citizens for their transactions.