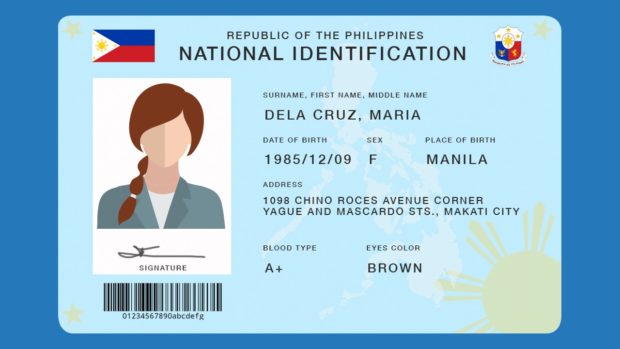 MANILA, Philippines—Hazy photos and typos printed on newly delivered national IDs have gone viral on social media, prompting the Philippine Statistics Authority (PSA) to give those who wanted these corrected before yearend to do so and get new IDs…for a fee.

National Statistician Dennis Mapa told reporters on Friday (June 10) that the PSA already reached out to ID holders who posted about printing errors on their Philippine IDs (PhilIDs).

The number of complaints that the PSA got so far paled in comparison to the millions of ID cards delivered through the state-run Philippine Postal Corp. (PHLPost).

As of Friday, the PSA released to PHLPost a total of 14.3 million PhilID cards, of which 12.3 million have already been delivered to registrants, Mapa said.

At the onset of the COVID-19 pandemic in 2020, President Rodrigo Duterte ordered the fast-tracking of the rollout of the Philippine Identification System (PhilSys) passed into law in 2018. The PhilID should have been the stable and systematic system which the Philippines lacked when cash dole outs were given away to vulnerable households, resulting in delays or mismanaged “ayuda” releases.

The government had prioritized the poorest households during PhilSys registration two years ago, so that they could also be enjoined to open accounts with the state-run Land Bank of the Philippines and join the growing banked population moving swiftly to digital space amid the prolonged pandemic.

But as the distribution of PhilID cards, being printed in cooperation with the Bangko Sentral ng Pilipinas (BSP), went on full swing, some registrants cannot help but complain on social media about their unflattering photos, or typographical errors.

Among the usual errors spotted by ID holders included misspelled names and missing second names, Mapa noted, admitting that some of these were mistakes of the PSA’s own encoders. There had also been errors which registrants themselves had been unable to spot during the encoding process, Mapa said.

Mapa said that later on, those who got married and would want to change their IDs to reflect their new civil status and bear their changed family names may have their cards corrected or be provided with new ones.

Mapa disclosed that the PSA will propose a P135 fee to replace ID cards. “The PSA will conduct stakeholders’ meetings on this matter as part of the process,” he said.

However, card replacement will not come so soon as the PSA continues to prioritize registering and delivering IDs to those without any identification documents yet.

The PSA targets to register 67 million Filipinos in PhilSys this year and deliver the same number of PhilIDs the soonest, Mapa said. The BSP prints about 80,000-90,000 cards daily.

“As soon as we have the majority of the 67 million PhilIDs, we will open for correction,” Mapa said. The PSA plans to allow applications for replacement IDs in existing registration centers, targeting the fourth quarter as the rollout period for corrections, additions or changes in family names.

Mapa added that the PSA also plans to expand by next year PhilSys registration to children below the age of five.