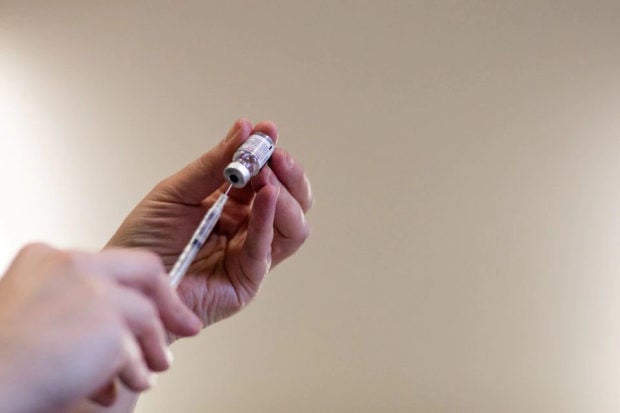 A nurse fills up syringes with the coronavirus disease (COVID-19) vaccines for residents who are over 50 years old and immunocompromised and are eligible to receive their second booster shots in Waterford, Michigan, US, April 8, 2022. | File photo by EMILY ELCONIN / Reuters

MANILA, Philippines — More than 1.5 million COVID-19 vaccines acquired by the private sector are due to expire by the end of the month, a former presidential adviser warned on Tuesday.

According to businessman Joey Concepcion, an adviser on entrepreneurship for the previous administration of President Rodrigo Duterte, a total of 1,516,040 vaccines worth $27 million — consisting of 628,680 AstraZeneca and 887,360 Moderna doses — “should be used rather than left to expire” before the end of the month.

In an estimate made two days before Duterte’s term ended last month, the Department of Health (DOH) placed the country’s vaccine wastage at 4.7 percent of the total supply at the time.

The DOH then said it was still within the acceptable rate set by the World Health Organization of 10 percent or lower, although it was double the wastage rate of 2 percent in April.

The agency also clarified that the jabs identified as “wastage” were not just those that had expired but also included doses found containing other particles or whose vials were broken.

Since last month, Concepcion has been calling on the government to expand eligibility for second boosters to include economic front-liners 50 years old and above.

“Many productive members of the workforce fall outside of the age limit set by the HTAC (Health Technology Assessment Council),” he said. “Yet they also have risk factors and are exposed to the virus every day when they come to work.”

Only three segments as identified by the HTAC are currently eligible to get second boosters — medical front-liners, seniors, and the immunocompromised.

“Government is trying to do its best, but there is this body that is moving quite slow,” Concepcion said. He urged the National Vaccination Operations Center (NVOC) to take over HTAC’s role in reviewing vaccine eligibility in the country.

HTAC, an independent advisory body created under Republic Act No. 11223 or the Universal Health Care Act, is tasked to review health technologies and interventions with government funding.

In an interview on Monday, Health Undersecretary and DOH officer in charge Maria Rosario Vergeire said the government aims to administer first booster doses to half the eligible population within the first 100 days of the Marcos administration or by Oct.8.

A fellow of pandemic monitor OCTA Research said on Tuesday that the impact of the current “mini-surge” in COVID-19 cases has been mitigated by increased vaccination among the public.

Addressing an online media forum on Tuesday, Austriaco said BA.5 is the “most contagious SARS-CoV-2 variant so far” and thus poses a “higher risk of reinfection.”

“If you got infected with Omicron in January, you are still at risk of being reinfected by BA.5,” he said, even as he noted that the infection will still be “relatively mild if you are vaccinated and boosted.”

He noted that unlike the last Omicron surge caused by the BA.2 subvariant in January — when Metro Manila, in particular, was averaging 17,000 daily cases — the rise in coronavirus cases in the capital region has been “very slow” this time, at only around 1,000 to 2,000 daily infections, despite the easing of mobility restrictions.

“[This] means that the population[’s] immunity against COVID-19 is still quite strong…from vaccinations, boosting and previous infections,” Austriaco said.

He urged the public to avail themselves of booster shots, as he warned that immunity is expected to “go down as time passes.”

Another OCTA fellow, scientist Benjamin Vallejo, said the government should “widen the bench” and accommodate more agencies and advisers in the Inter-Agency Task Force for the Management of Emerging Infectious Diseases (IATF), so that it would not overlook vital approaches and strategies in managing the pandemic.

“[T]he wider the expertise we can draw, the better will be for us to come up with national consensus on how to approach the problem, [which is a] very complex subject,” Vallejo said.

Malacañang had earlier said the DOH would “reconstitute” and “streamline” the IATF “to integrate it with the regular processes” of the National Task Force Against COVID-19 as well as the National Disaster Risk Reduction and Management Council. —WITH A REPORT FROM NESTOR CORRALES

P40B worth of vaccines wasted in low vaxxing turnout — Concepcion

Read Next
What is a ‘kamote’ rider? Kuya Kim explains