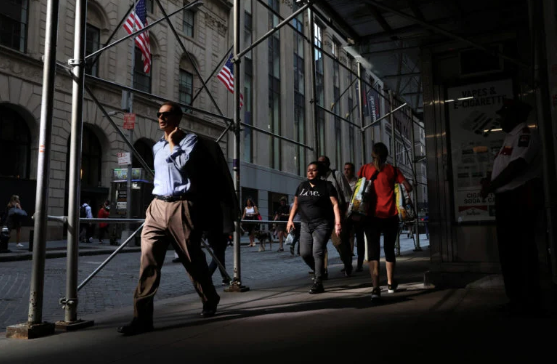 People walk on Wall St. during the morning commute, as the city deals with record temperatures and the excessive heat, in New York City, U.S., July 20, 2022. REUTERS

BOSTON — Some 100 million Americans from New York City to Las Vegas are under heat warnings this week as temperatures rise well above 100 Fahrenheit (38 Celsius), part of a trend of extreme weather made worse by climate change.

An NWS advisory for Dallas, Texas, where the high temperature was forecast to reach 112 F (44.4 C), cautioned against strenuous activity in peak heat hours and reminded people to stay hydrated.

New York Salvation Army captain and pastor Jack Tripari has been helping people affected by the heat wave. On Wednesday he ushered a woman into a Salvation Army center for water and a moment of cool air.

“I do believe that there aren’t enough people who know about the service so they might be missing out on receiving the help that we can provide during this extreme weather,” said Tripari.

The Brooklyn Bay Ridge Salvation Army cooling center is one of many Salvation Army centers across the country. It operated just a few days in June but this time it’s expected to stay open at least until the end of the week, Tripari said.

Sweat dripped from 32-year-old Mako Arroyo’s face as he collected garbage from a New York City sidewalk on Wednesday. The Clean Space sanitation worker said he pops inside businesses to cool off occasionally along his one-mile route.

“There’s nothing else you can do but to stay hydrated. Luckily, on each block there’s a store,” Arroyo said.

Rose Cowles Fussell’s family in Glenmora, Louisiana installed an air conditioner in the dog house for their 15-year-old American bulldog named Boston. They’ve been freezing milk jugs full of water to toss in the swimming pool. But Wednesday they decided to retreat in hopes of finding cooler climates. 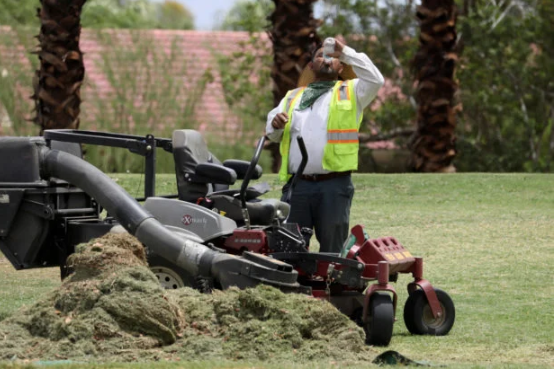 A landscaper drinks water in temperatures that have reached well above triple digits in Palm Springs, California, U.S. July 20, 2022. REUTERS

She packed up the car, her husband and two teenagers and the dog and headed on a trip of 750 miles (1,200 km) to Fernandina Beach in the Jacksonville, Florida area.

Air pollution presents yet another health risk in the heat. Pollution from the electric grid can more than double when power stations run full tilt to keep air conditioners running.

In New England, carbon dioxide production soared to 123 metric tons per hour just before 8 p.m. EDT on Tuesday. That was more than double the hourly rate earlier in the day of just 58 metric tons, according to estimates by ISO New England, the grid operator for the six-state region.

The U.S. heat wave follows conditions in Europe this week that have touched off wildfires and set record temperatures in the kind of weather event that scientists say will become more frequent with climate change.

No relief as heatwave in US moves east