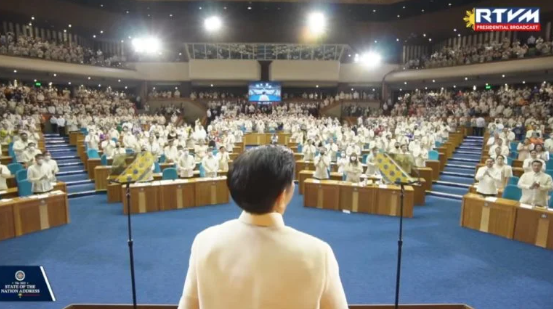 President Ferdinand “Bongbong” Marcos Jr. concluded his first State of the Nation Address by saying “the state of the nation is sound.” Screengrab from RTVM live streaming

MANILA, Philippines — President Ferdinand “Bongbong” Marcos Jr. delivered his first State of the Nation Address (Sona), giving a glimpse of his first few days in office and his plans for the next six years.

Unlike his predecessor, former President Rodrigo Duterte, Marcos generally did not deviate from his written speech – mostly following each word and line to a T.

Marcos’ first Sona lasted for one hour and 13 minutes. In the end, Marcos said: “The state of the nation is sound.”

Marcos began his address by defining the economic targets the administration has set for the next six years—echoing the figures his economic team previously presented.

According to Marcos, the administration’s goal is to have a 6.5 to 8 percent real gross domestic product growth annually between 2023 to 2028 and reduce the country’s poverty rate to 9 percent by 2028.

Among the initiatives the administration will push, Marcos said, is the levying of a value-added tax on digital service providers.zation“The initial revenue impact will be around P11.7 billion in 2023 alone,” Marcos said.

Marcos, who serves as the concurrent agriculture chief, also focused on the critical issue of food security and the welfare of farmers and fishermen.

He said the loans and financial assistance for farmers and fishermen would be an “institution” in his administration.

Aside from institutionalizing loan programs, Marcos also vowed that the government would seek to provide cheaper farm inputs, fertilizers, pesticides, seeds, and feeds while modernizing the agriculture and livestock industry through science and technology.

Further, Marcos also disclosed his plans to impose a one-year moratorium on the payment of land amortization and interest payments.

“A moratorium will give the farmers the ability to channel their resources in developing their farms, maximizing their capacity to produce, and propel the growth of our economy,” Marcos said.

Marcos said he would implement basic developments such as road improvements for easier access to tourism spots for the tourism sector.

“We will also upgrade our airports and create more international airports to help decongest the bottleneck at the Manila International Airport,” Marcos said.

In terms of digitalization, Marcos said 30-million physical national IDs and 20-million digital IDs are expected to be issued by the end of the year.

Marcos also bared his order to the Department of Information and Communications: To establish the “Broad Band ng Masa” project.

“Once again, I will not suspend any of the ongoing projects as those have already been shown to be of benefit to the public that they serve,” Marcos said.

Marcos said no more lockdowns will be imposed in the country despite the increase in COVID-19 infections.

The President also promised to establish the Philippines’ own Center for Disease Control and Prevention and a vaccine institute while stressing the need to establish more health centers and hospitals across the country.

“One of the cornerstones of a strong healthcare system is the provision of competent and efficient medical professionals. We will exert all efforts to improve the welfare of our doctors, nurses, and other medical frontliners,” Marcos said.

Marcos also made his order to the Department of Social Welfare and Development clear: Implement faster response for calamity victims.

Marcos said there should also be better coordination between the DSWD and the Department of Human Settlements and Urban Development for the improved implementation of the “Emergency Shelter Assistance Program” for calamity victims.

Marcos also echoed his earlier order to cleanse the list of beneficiaries of the Pantawid Pamilya Pilipino Program (4Ps).

Marcos backed the return to full face-to-face classes, saying Education Secretary and Vice-President Sara Duterte, is now preparing for its implementation in the next school year.

The President also took note of the discussions on the K-to-12 education system, saying it is being carefully reviewed.

“As for the ‘horror’ stories that we have heard about  the poor quality of educational materials and supplies that are being given to our schools — this must end!” Marcos said.

READ: Marcos wants to reexamine medium of instruction in schools

The country must also do better in the international rankings, especially regarding the STEM subject, said Marcos.

Marcos said it is up to the country’s educational system to develop and refine its incredible talent pool.

Regarding foreign policy, Marcos said he would “not preside over any process that will abandon even a square inch of the territory of the Republic of the Philippines to any foreign power.”

“With respect to our place in the community of nations, the Philippines shall continue to be a friend to all. And an enemy to none,” Marcos said.

“The Philippines has always been open and welcoming to all our foreign friends and visitors. That is our world view, and that is our culture,” he added.

Meanwhile, Marcos said the government would launch a command center that mainly focuses on overseas Filipino workers (OFWs) in distress and needing to be repatriated back to the Philippines.

Marcos also vowed to remove red tape in pursuing digital empowerment, noting plans to automate the verification of contracts and issue secure  Overseas Employment Certifications that can be kept in smartphones.

He called on the Department of Migrant Workers to make this initiative a top priority.

The President also said the Philippine government is coordinating with the government of Saudi Arabia to open deployment to the mid-eastern country.

In the latter part of his speech, Marcos laid down his priority measures which are as follows:

“We have assembled the best Filipino minds to help navigate us through this time of global crisis,” Marcos said.

“We will endure. Let our Filipino spirit ever remain undimmed. I know this in my mind, in my heart, in my very soul that,” he added.