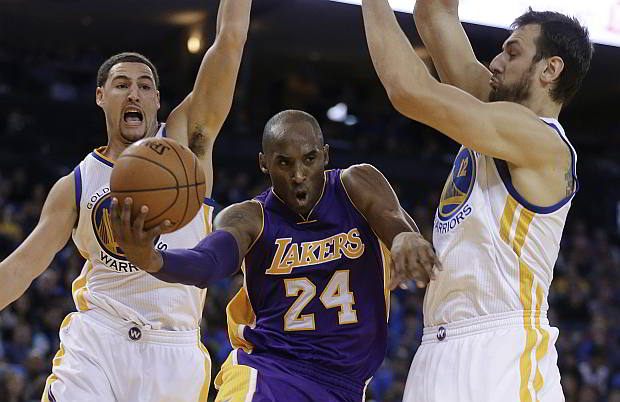 Thompson, who inked a four-year maximum extension worth about $70 million Friday, shot 14 for 18 from the floor. Curry added 31 points and 10 assists, and the Warriors withstood Kobe Bryant’s big plays to thrill a blue-shirt wearing sellout crowd of 19,596 in the team’s home opener.

Bryant scored 19 of his 28 points in the third quarter and nearly brought the depleted Lakers back. Instead, Los Angeles collapsed in the final quarter to lose its fourth game in five nights.

The Lakers are 0-4 for the first time since the 1957-58 season when the franchise was located in Minneapolis.

Monta Ellis also scored 17 for Dallas. Parsons’ performance was highlighted by a momentum-swinging 3-pointer from well behind the arc that gave Dallas a 101-96 lead in the middle of the fourth quarter.

Davis had 31 points, 15 rebounds and three blocks for New Orleans.

Jeff Teague scored 25 points and Al Horford in the Atlanta Hawks’ home opener against the Pacers.

Indiana closed to 95-92 when Donald Sloan was fouled in the corner by Horford and knocked down all three free throws with 1:13 left. But Teague answered with a jumper, Sloan missed and Teague made a pair of free throws with 26.6 seconds left to clinch the victory.

Teague scored 11 of Atlanta’s first 22 points and came up big at the end.

In Orlando, DeMar DeRozan scored 26 points and Kyle Lowry added 21 as the Raptors beat the Magic for the eighth straight time.

The Raptors held the Magic to 35.8 percent shooting in the final quarter and put all five starters in double figures to win their second in a row.

In Philadelphia, Chris Bosh had 30 points and eight rebounds for the Heat, which won its second straight. Mario Chalmers scored 18 points, and Dwyane Wade had nine points and 10 assists.

Tony Wroten had 21 points and 10 assists for the Sixers, and Brandon Davies scored 18 points for the winless Sixers.

Expected to challenge the 82-game mark for worst record in NBA history, the Sixers are 0-3 and could add to that winless streak with three more home games in the next week.

Paul Pierce was ejected before halftime in his first home game with the Washington Wizards, and Otto Porter picked up the slack with a career-high 21 points.

Starting the third quarter in place of Pierce, second-year forward Porter — essentially a nonfactor as a No. 3 overall draft pick as a rookie — scored 19 points in the second half and finished 7 for 11 from the field and 6 for 7 from the free-throw line.

In Charlotte, Marc Gasol scored 22 points, and Zach Randolph had 12 points and 12 rebounds as the Grizzlies opened 3-0 for the first time.

The Hornets (1-1) were led by Al Jefferson, who scored 19 points on 8-of-19 shooting. Michael Kidd-Gilchrist had 11 points and 12 rebounds, but the team’s big free-agent acquisition, Lance