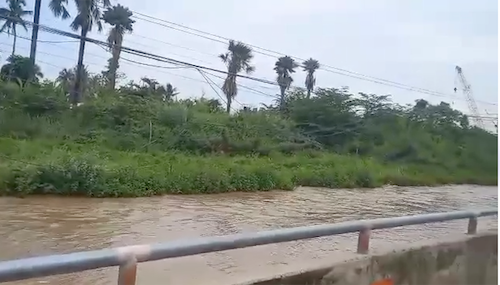 Floodwaters submerged part of the road at the foot of the Marcelo Fernan Bridge after the rains in the afternoon this day, August 13, in Barangay Umapad, Mandaue City. | Screen grab from Mary Rose Sagarino’s video

MANDAUE CITY, Philippines — Some 401 individuals were evacuated in Mandaue City because of the heavy rains on Saturday noon, August 13.

Buddy Alain Ybañez, head of the Mandaue City Disaster Risk Reduction and Management Office (CDRRMO), said that as of 8:20 p.m. today, there were already 85 families or 401 individuals at the Umapad Elementary School.

Ybañez said the evacuees were already taken care of by the City Social Welfare and Services.

A few areas in the city which experienced flooding were Barangays Umapad and Casuntingan, among others.

Ybañez said that earlier, there was an increase in the water level of the Butuanon river.

Moreover, Ybañez said that they would be requesting a dredger from the Department of Public Works and Higways to clean the river especially in Sitio Pulang Bato, Barangay Casuntingan.

He said one of their personnel who is living near the area observed that the color of the flood is muddy which might be because of silting.

He said though that the DPWH and the city government had been doing clean-up drives in some of the portions of the city’s rivers.

Read Next
Mandaue cops eye supplier of ‘drug courier’, who was caught with P10.2M shabu