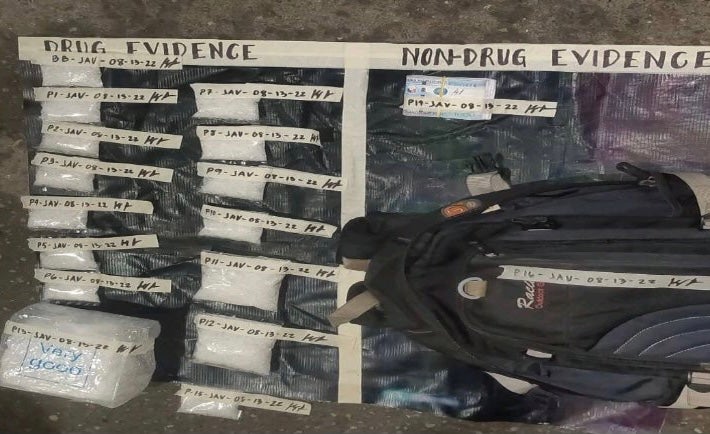 At least P10.2 million worth of suspected shabu were seized during a buy-busy operation on Saturday, August 13, 2022, in Barangay Cabancalan, Mandaue City|MCPO

CEBU CITY, Philippines — Police are trying to find out who the source of the P10.2 million worth of illegal drugs, which was confiscated from an 18-year-old man  in Barangay Cabancalan, Mandaue City, today, August 13.

John Alex Villaraza of Barangay Carreta, Cebu City, was caught with 1.2 kilos of suspected shabu during the buy-bust operation at past 1 a.m. today, which was conducted by the Mandaue policemen, said Police Captain Armil Coloscos, chief of the Casuntingan Police Station.

Coloscos said that they had been monitoring Villaraza for over a month before they conducted the buy-bust operation.

He said that Villaraza was allegedly a bodegero or the one who would receive and store the drugs before distributing it in the streets.

Aside from that, Police Captain Coloscos also described the suspect as a drug courier.

He also said that they conducted the operation against Villaraza after his name came up in some of our drug operations.

Coloscos said that that some of these illegal items (illegal drugs) were set for delivery in the northern areas in Cebu province.

Coloscos said that so far, this was the biggest drug haul in the areas under his station. Mandaue City Police Station 4 covers barangays Casuntingan, Tingub, Maguikay, Banilad, and Cabancalan.

(The drugs here are getting scarcer. Almost the five barangays in our jurisdiction are nearly drug-cleared barangays. It is just needs a little push from us.)

Barangay Tingub was declared as a drug-cleared barangay last March 2022.

Taxi cab driver arrested with P13M worth of drugs in Mandaue