Eye doc’s advice: With kids back on campus, cut their ‘screen time’ 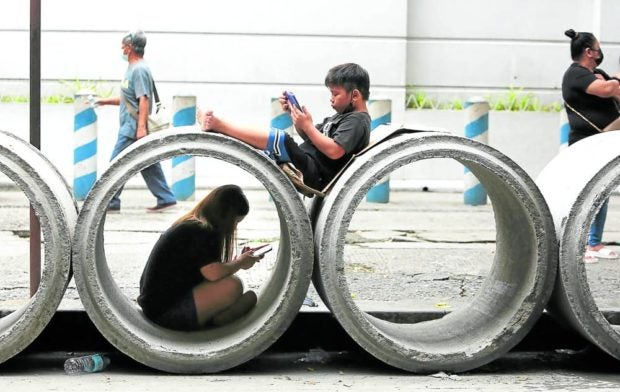 GIVE IT A BREAK | The Philippine Eye Research Institute has raised concerns over Filipino children becoming more susceptible to myopia or nearsightedness because of prolonged viewing of videos on electronic gadgets for study or recreation. If it can’t be avoided, their screen time should be limited to just two hours a day. (Photo by MARIANNE BERMUDEZ / Philippine Daily Inquirer)

MANILA, Philippines — Mabry, 7, has been spending about eight hours of screen time a day since the start of the pandemic lockdowns, a habit he acquired especially after schoolchildren like him were forced to stay home and their studies continued via distance learning.

Jolie Ortega said her nephew, a second grader who lives next door to her in Trece Martires, Cavite province, made full use of his own smartphone and tablet for his online class, but he also had his fill of video games such as Roblox and Minecraft on YouTube.

It began to worry the boy’s mother, who one day decided to buy him a pair of antiradiation glasses to protect his eyes.

“My sister had him wear those eyeglasses so his vision wouldn’t get blurry from all that gadget use. Sometimes, my sister would even hide the gadgets from him just to lessen his screen time,” Ortega told the Inquirer.

Instead of screen time, children should be “exposed often to natural light and do more outdoor activities” to stop the progression of myopia, or nearsightedness, a common eye condition that makes distant objects appear blurry, according to Dr. Leo Cubillan, director of the Philippine Eye Research Institute (Peri).

The pandemic has forced children in many households to turn to gadgets for recreation and online learning while in quarantine, Cubillan noted.

As a result, “there are kids whose eye grade tends to increase faster. [But] we can prevent it by exposing them to outdoor light.”

In a forum organized by the Department of Health (DOH) on Thursday, Cubillan cited a study in Singapore where 97 percent of children who had myopia were encouraged to spend more time outdoors.

“The [rate of] myopia [in the covered age group] was reduced by 10 percent every year. So [myopia] can really be prevented,” he said.

The ophthalmologist also took note of the prescribed screen time of the World Health Organization (WHO) for children. Those under 2 years should not spend time with screens at all, while those age 2 to 5 should be limited to only an hour of screen time.

Children in the elementary and high school age group should spend only up to two hours a day in front of gadgets.

According to a Peri study conducted in 2018, four Filipino students in every class of 40 were found to have vision problems, of which three may have a refractive error and one may have amblyopia or “lazy eye.”

Refractive errors occur when the eye keeps light from correctly focusing on the retina, while amblyopia means vision in one or both eyes is reduced due to poor development during childhood.

With a prevalence rate of 2 to 5 percent among children, amblyopia can lead to permanent visual impairment and blindness, Peri said.

It can be treated, however, through corrective lenses and eye patches before the child reaches 7 years old, it added.

Cubillan said people working in front of computer screens should consider the so-called “20-20-20 rule” to prevent digital eye strain: “Take a 20-second break every 20 minutes by looking at an object 20 feet away.”

“Our eyes are at their most relaxed position when we glance at objects that are far. When we look at screens, our eyes get worked up and exhausted,” he explained.

Gadgets should also be held at least 18 to 24 inches away, he said.

Increased screen time among children makes the resumption of in-person classes crucial, “not only for a child’s eye health but for their overall development,” according to Cubillan.

The gradual return of in-person classes should put the national vision screening program back on track, in compliance with Republic Act No. 11358 or the National Vision Screening Act of 2019.

Under the law, the Department of Education, the DOH and Peri will lead a vision screening program which aims to detect and correct refractive errors among children starting at the kindergarten level.

Stalled by the pandemic, the program was supposed to be conducted by teachers using vision screening kits, which include charts with symbols and numbers, to determine a child’s visual acuity.

The law also calls for the establishment of a referral system for eye care treatment and a database of the test results.

During the shift to blended learning, Peri created an online version of the screening system, designed to allow parents or guardians to help teachers take measurements via apps such as Facebook messenger, Viber and Zoom, Cubillan said.

“We had a hard time [implementing it] during the pandemic, so we made an online vision screening program, which could be done in a hybrid learning [environment],” he said. The screening plan will not only prevent severe eye damage such as blindness, but also improve a child’s performance in school, Cubillan added.

“Hopefully with universal health-care [coverage], access to eye care would increase from birth to the [senior years] so that we can prevent blindness through early detection and treatment,” he said.