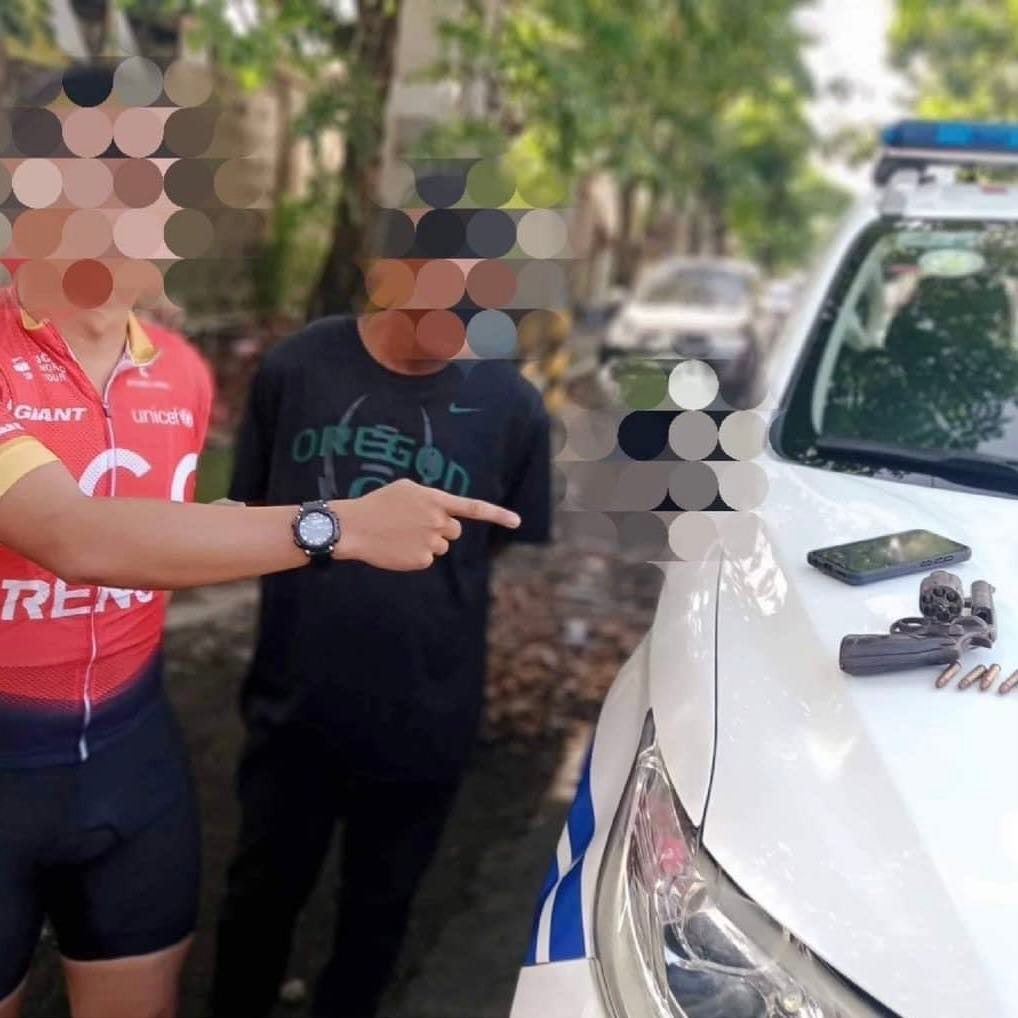 It was not his lucky day as the robbery hold-up suspect was arrested by his own victim, who happens to be a police officer, at the intersection of Don Mariano Cui and Jasmin Street in Barangay Capitol Site, Cebu City on Saturday morning, September 10, 2022. | Photo courtesy of Abellana PS

CEBU CITY, Philippines  — An armed robber landed in jail after he held up the wrong biker, an off-duty policeman doing his early morning exercise, in a street in Barangay Capitol Site, Cebu City today, September 10.

Police Major Nolan Tagsip, chief of the Abellana Police Station, however, begged off to give the identity of the suspect, saying that they were still conducting a followup operation and checking the background of the suspect if he had any cohorts in his criminal activities.

Tagsip said that initial investigation showed that the suspect, who was on a motorcycle suddenly blocked the path of a biker, who was identified later as Patrolman Segred Paul Yorpo of the Mandaue City Police Office, at past 7 a.m. as he was pedaling along the intersection of Don Mariano Cui and Jasmin Street in Barangay Capitol Site.

The suspect allegedly pointed his .38 caliber revolver on Yorpo, who was off-duty at that time and was not in a police uniform, and asked for his cellphone, which was worth P17,000.

Yorpo did not hand over the phone, which was tucked inside the backpocket of his cycling shorts.

When the suspect reached over to get Yorpo’s phone at the policeman’s backpocket, Yorpo then saw his chance to overpower the suspect, a scuffle ensued and the policeman succeeded in taking the suspect down and wrest his gun away from him.

Yorpo then called the Abellana police, who responded to his call for assistance.

The suspect was then arrested and brought to the Abellana Police Station where he was detained pending the filing of charges.

Tagsip said that the arrested man, who was in his 40s and was a resident of Barangay Tisa, Cebu City, had fit several descriptions of reports of a robber and a snatcher on a motorcycle operating within the jurisdiction of the Abellana Police Station.

Tagsip said that the suspect’s modus operandi would be to block his victims with his motorcycle and threaten them to give up their valuables.

Aside from that, Tagsip said, that the suspect would also allegedly snatch cellphones or valuable of his victims, who were walking along the streets, and escape on his motorcycle.

He said that they recovered two cellphones from the suspect and were calling on people whose phones were snatched or taken from them by a robber to visit the police station and check if these cellphones were their mobile phones.

With the suspect’s arrest, Tagsip said he was hoping that this would lessen the robbery and snatching incidents in their areas of jurisdiction.

He recently admitted that snatching and robbery incidents were a concern of them but they had these under control.