An internet for the common good 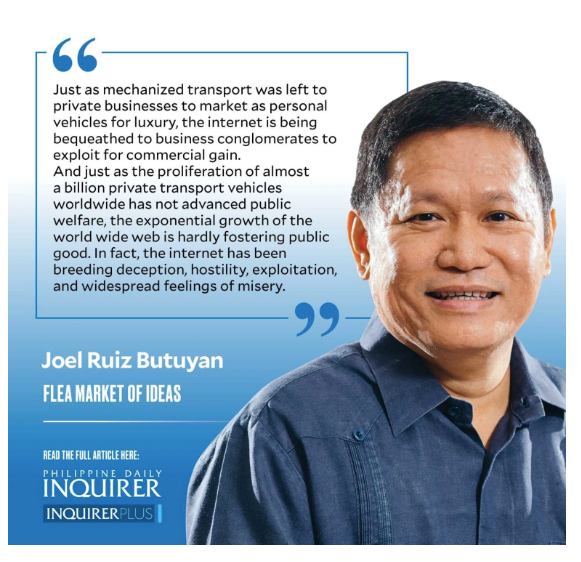 One of mankind’s greatest inventions is motorized transportation. But it eventually became mankind’s worse invention when the world allowed its unstrained misuse. Mankind is again reaping the rewards of an even greater new invention—the internet. And yet again, this remarkable new invention is at risk of likewise evolving into mankind’s worse creation.

Motorized transport revolutionized our way of life in countless ways. It made the world smaller by enabling man to travel, work, reside, and do business in what used to be distant lands. In the process, it has created and spread wealth—both material and intellectual—for individuals and nations.

In hindsight, mankind faced two options after the invention of motorized vehicles. There was the option to consistently build expansive public transportation systems (railways, trams, bus networks, commuter boats) that would service communities. The second option was to leave people to individually fend for themselves in their transportation needs.

There was (and there still is) the opportunity for nations to recognize and treat motorized transport as a public necessity that should be utilized to serve communities and not merely privileged individuals. By analogy, the options were no different from the following: either having a water system that serves the entire community or allowing each household to dig its own deep well, and; either maintaining a power plant that supplies electricity to the whole community or leaving each household to buy its own generator.

We all know which direction the world took. Nations defaulted on their role to make mechanized transport a community utility, and instead allowed the unrestrained growth of private transport as vehicles of luxury. Vast areas of our limited land resources have been devoted to roads and parking spaces; huge chunks of public funds are spent annually to construct, repair, and maintain roadways, and enormous quantities of the world’s precious natural resources (oil, metals, and minerals) are exploited to produce and run private vehicles.

There were benefits to mankind resulting from the other inventions and businesses spawned by the growth of the private vehicle industry, but when tallied against the costs to society and planet Earth, it’s been responsible for more misery than happiness.

The wrong road, taken by mankind on motorized transport, is happening all over again in its regard of the internet. There’s scant recognition of the colossal importance of the internet on humanity, and its capacity to immensely improve public welfare. There’s little appreciation of the role of the internet as the new “superhighway” that has exponentially increased mankind’s ability for virtual travel, work, education, and to do business.

In our country, this little regard for the internet as an epoch-defining tool for public good is reflected in our government’s little interest in putting up publicly funded infrastructure that provides public internet service to the whole country, in the same way that electricity and water services are regarded as public utilities. It is reflected in our government’s scant interest in assuming the role of a regulator of our country’s space in the world wide web. Our government has surrendered both these roles to private enterprises, thereby giving business interest-free license to define the purpose and nature of the internet in people’s lives.

Just as mechanized transport was left to private businesses to market as personal vehicles for luxury, the internet is being bequeathed to business conglomerates to exploit for commercial gain.

And just as the proliferation of almost a billion private transport vehicles worldwide has not advanced public welfare, the exponential growth of the world wide web is hardly fostering public good. In fact, the internet has been breeding deception, hostility, exploitation, and widespread feelings of misery.

We need the world’s governments and all of humanity to work together to repurpose and retool two of the greatest inventions of mankind—motorized transport and the internet—to become genuine inventions that work for the good of humanity.