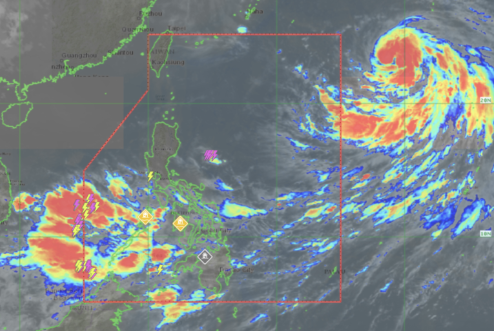 The Philippine Atmospheric, Geophysical and Astronomical Services Administration (Pagasa), in its early morning update, said that Severe Tropical Storm Nanmadol was spotted some 1,850 kilometers east of extreme Northern Luzon, with maximum sustained winds of 95 kilometers per hour (kph) near the center and gustiness of up to 115 kph.

Pagasa weather specialist Benison Estareja said that “Nanmadol” will enhance or strengthen the southwest monsoon (habagat) which will trigger rainfall in parts of Southern Luzon, Western Visayas and western section of Mindanao.

Partly cloudy to cloudy skies with isolated rain showers are expected in Metro Manila and the rest of the country.

Pagasa did not raise any gale warning but warned of possible flash floods and landslides in rain-affected areas.

Forecast temperature range on Thursday in key areas and cities:

Read Next
LOOK: A freediver shares breathtaking underwater photos with barracudas in Siquijor