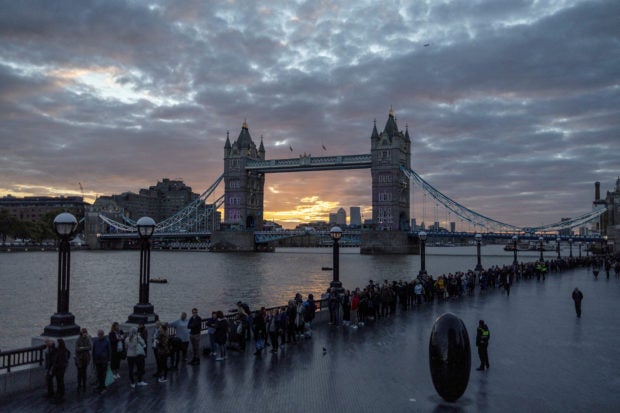 LONDON — The entry to an already miles-long queue to see Queen Elizabeth lying in state in London resumed after a pause on Friday, with the government saying the current wait-time is over 24 hours, in temperatures set to plummet to 7 degrees celsius (45°F).

Elizabeth died in Scotland aged 96 last week, prompting an outpouring of emotion that drew tens of thousands out to see her coffin on its journey to London, and that has now led many more to join the long line to pay their final respects during a four-day lying-in-state ceremony.

“Expected queuing time is over 24 hours and overnight temperatures will be cold,” Britain’s culture department warned on Twitter at 1614 GMT, having paused the entry to the queue around 0900 GMT when it reached a designated end-point in Southwark Park.

But people still waited. Neither the hours-long wait nor the weather deterred mourners, who were pouring in from both within the country and across the world to pay their respects to Britain’s longest reining monarch.

Reuben Fevrier, an accountant from London who was in the line, spoke of the queen’s “stoicism, her deep commitment to the country, a remarkable life.”

“I think this is the least I can do.”

The constantly-moving queue is snaking its way from Southwark Park to parliament’s Westminster Hall, where the queen’s coffin is lying in state. Some 750,000 people in total are expected to file past before Monday’s funeral.

“I’ve no sensation in my knees at all or my legs,” said Hyacinth Appah, a mourner from London in the queue. “But it’s been fine. Most of the people have been lovely and we’ve had quite a nice time.”

Temporary toilets have been installed along the route of the queue, and mourners have been asked not to bring camping equipment, sleeping bags or folding chairs.

“She was everything. She was here the whole of my life. You couldn’t ask for a more regal, dignified person. She represents a country — she is the country,” said Susan Green, a retired NHS worker.

Naomi Brown, from London, said she had waited for nearly 11 hours after joining the queue Thursday night after work.

“I just thought, I’m never going to do it again. I have so much respect for the queen, not once did she ever falter,” 29-year-old Brown said, speaking to Reuters as she was nearing the front of the line. “She has been such a good symbol for our country… It feels like we have lost a family member.”

Read Next
AFC U-19 Qualifier: Valiant efforts for the PH squad comes up short versus Thais