Man wanted for robbery with homicide since 2009 is nabbed in Minglanilla, Cebu 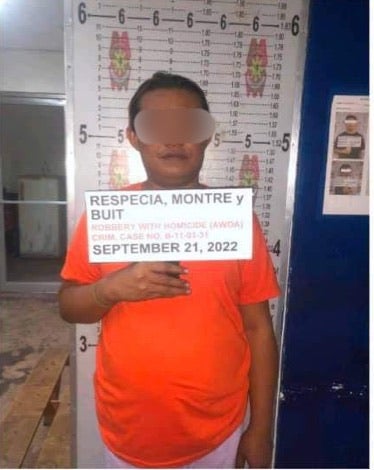 A man, who went in hiding for 14 years in Leyte, was arrested in Minglanilla, southern Cebu, via virtue of a warrant of arrest on Thursday, September 22, 2022. | Photo of Opao Police Station

CEBU CITY, Philippines — After 14 years in hiding, a 40-year-old man, who was wanted for robbing and killing a teacher in 2009 in Leyte, was arrested in Minglanilla town, southern Cebu, on Thursday afternoon, September 22, 2022.

Respecia was arrested via virtue of a warrant of arrest for the crime of Robbery with Homicide that was signed by Judge Clinton Nuevo, presiding judge of Regional Trial Court 8 (RTC 8) last July 20, 2011, with no bail recommended.

Libres said that Respecia said that he had no knowledge of who robbed and killed the victim. However, the accused told police that he was somehow happy that he was arrested as he was already tired of hiding.

Respecia is currently detained at the Opao Police Station, which was in charge of the warrant of arrest for Respecia.