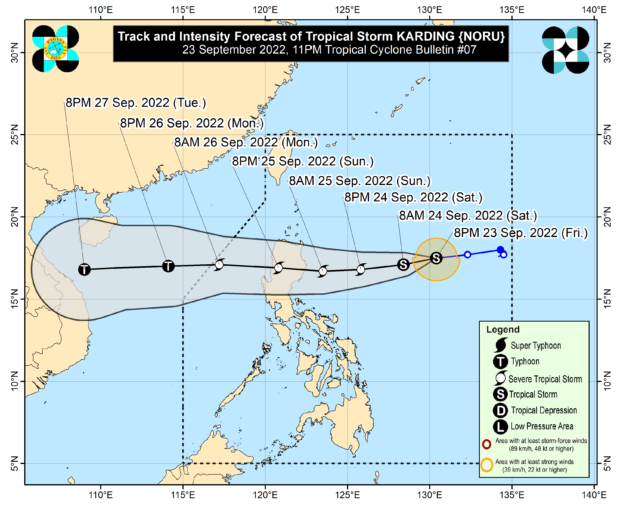 Pagasa’s latest update on Friday night said Signal No. 1 is already hosted over the following areas:

According to Pagasa, Karding was last seen 895 kilometers east of Northern Luzon, still packing maximum sustained winds of 75 kilometers per hour (kph) near the center and gustiness of up to 90 kph.

It is also still moving west at a speed of 15 kph.

As of now, Pagasa’s forecasts maintained that Karding will intensify into a severe tropical storm by Saturday night, at which time it would be 395 kilometers east of Casiguran.

By Sunday morning, it would be just 155 kilometers northeast of Casiguran, with Karding now packing maximum sustained winds of 110 kph.

It would then cross Luzon, weakening slightly due to the mountain ranges. By Sunday night it would over the vicinity of Mankayan, Benguet, before emerging towards the West Philippines Sea.

Karding would then leave the Philippine area of responsibility between Monday afternoon and night. However, before Karding leaves, Pagasa said there is a possibility that Signal No. 3 and Signal No. 4 would be raised if the cyclone intensified further into a typhoon-category.

Pagasa said that from Saturday night to Sunday early morning, light to moderate with at times heavy rains will be felt over Batanes, Cagayan, Isabela, and the northern portion of Aurora.

Pagasa warned that these conditions may cause flash floods, scattered flooding, and landslides over areas near mountain slopes.

It also noted that the cyclone would intensify the southwest monsoon or habagat, and would bring occasional rains over most of Southern Luzon, including Metro Manila, and parts of Visayas.