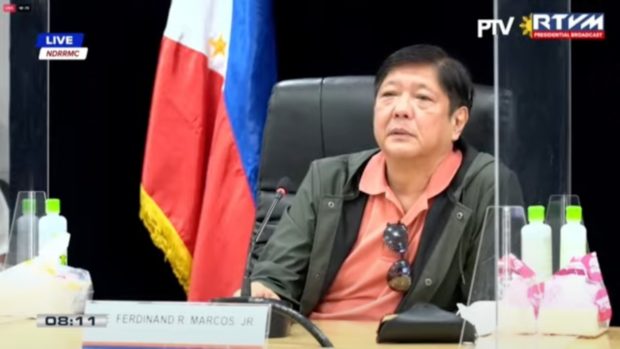 President Ferdinand “Bongbong” Marcos Jr. during a briefing with the NDRRMC after the onslaught of Typhoon Karding. (Screenshot from PTV/RTVM video)

President Ferdinand “Bongbong” Marcos Jr. on Saturday said advances in those areas were the highlights of his first 100 days in office.

“They say that the first 100 days is a honeymoon period when you’re still feeling your way. But that’s not how I feel — maybe because I’m already familiar with the work. That’s why I was able to start immediately,” Marcos said in a video posted on his Facebook page.

The president touted the lifting of the mandatory use of face masks outdoors, saying this was due to the improving vaccination coverage nationwide.

“Because of our good numbers, we reached the point that wearing face masks outdoors is just voluntary,” he said, urging people to get their booster shots.

The president said 73 million Filipinos had been fully vaccinated, with 19 million of them already getting their booster shots.

According to him, 81,000 COVID-19 vaccine doses are being administered daily.

Meanwhile, he said his administration had disbursed some P1.04 billion to fund the special risk allowance for 55,000 health frontliners who have yet to receive theirs.

“The recovery of our economy is also the recovery of the Filipino family. That’s why we have been taking deliberate steps to increase jobs and opportunities in the country,” he said.

Marcos said the government’s decision to resume face-to-face classes during the COVID-19 pandemic had created a “significant economic activity and stimulus,” especially for retail and informal vendors.

His trips to Indonesia, Singapore, and the United States yielded some $18.9 billion in investment pledges, which would also create “hundreds of thousands of jobs,” according to the chief executive.

The president, who is concurrent secretary of the Department of Agriculture, said an additional P84.1 million was also allocated for the agriculture sector, particularly for local coffee production.

He also mentioned his executive order placing a one-year moratorium on amortization and interest payments of agrarian reform beneficiaries.

Marcos’ first Sona: ‘The state of the nation is sound