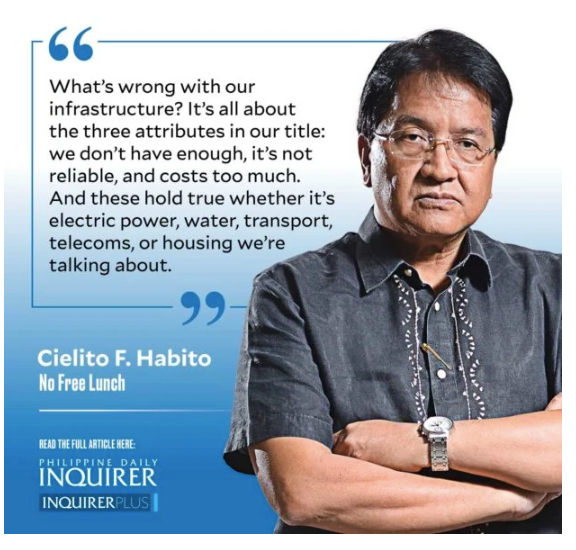 What’s wrong with our infrastructure? It’s all about the three attributes in our title: we don’t have enough, it’s not reliable, and costs too much. And these hold true whether it’s electric power, water, transport, telecoms, or housing we’re talking about.

The frequency of yellow and red alerts that the National Grid Corporation of the Philippines has issued lately reveals the inadequacy of our power supplies. A yellow alert, in plain terms, means that supply is too low and precariously close to falling short of demand, while a red alert means that supply actually falls short, necessitating rotating “brownouts.” There have been more than the usual yellow alerts this year, suggesting thin reserves—especially when power plants fail unexpectedly, as seven reportedly did on Sept. 12. That so many could fail at the same time also reflects the system’s unreliability, likely due to age and/or inadequate maintenance of the plants. That power cost in the country is among the highest in the region is well known. Only Singapore reportedly exceeds our industrial power costs in Asean, while residential power costs are next highest to Japan in all of Asia. International energy think tank Institute for Energy Economics and Financial Analysis blames “uncompetitive market structures” and “heavy reliance on imported fossil fuels” for the country’s high power costs.

Many eyes are on water lately, amid warnings that it is the next crisis resource to cause conflicts globally. With its watersheds and aquifers rapidly degrading, the Philippines lacks water capture and impoundment systems commonly used elsewhere. Much greater coordination is needed on competing water uses (i.e., household and commercial use, crop irrigation, and hydropower generation), currently fragmented across various agencies, and raising costs of provision. The interagency National Water Resources Board has not been enough, and its focus seems heavy on regulation but short on development. Many are calling for a Cabinet-level Department of Water Resources, following the example of many other countries.

Meanwhile, we see the same inadequacy, unreliability, and high cost—not to mention questionable safety—in our land, water, or air transport systems. Our land transport planning is often described as too “car-centric,” as building and widening roads take more prominence than providing extensive and efficient mass transport systems. Indeed, it is said that a country’s level of development is seen in how effective mass transport systems make private car ownership unnecessary. Interisland water transport remains inadequate in too many parts of our country, and aging fleets compromise safety and reliability. Lack of competition unduly raises costs of interisland shipping, with the long-cited observation that it is costlier to ship products to Manila from Mindanao than from overseas. And while air travel has become more accessible over the years, many airports around the country leave much to be desired.

Now the staple in telecommunications, internet connectivity needs much wider reach, greater speed and reliability, and more accessibility and affordability, especially for the poor. While world-class internet speeds are available, they come at a hefty price.

But the most basic of infrastructures is housing, for which the unmet need has been persistently high, and on which the government has simply not spent enough. Based on data compiled by the Asian Development Bank, government spending on “housing and community amenities” takes 10.6 percent of the budget in Malaysia, 6.2 percent in Myanmar, 5.2 in Brunei, 4.8 in Korea and Singapore, 2.7 in Indonesia, 1.7 in Japan, 1.3 in Thailand and Bangladesh—but a mere 0.18 percent in the Philippines! This comparison alone speaks volumes—and housing expenditures have among the most potent multiplier effects for the whole economy.

It will take much more than slogans like “Build, build, build” for our physical capital to truly uplift Filipinos’ lives. It demands policies, programs, and public investments that would ensure adequacy, reliability, and low cost of our country’s infrastructure.