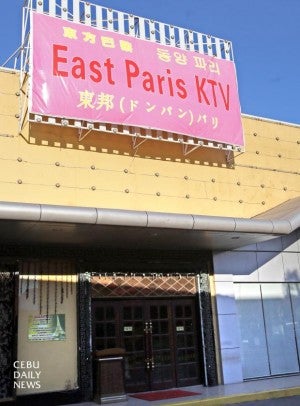 The signage of the new East Paris KTV in the North Reclamation Area has Korean characters which indicate who its target clients are. (CDN PHOTO/ JUNJIE MENDOZA)

Is it a new KTV bar? Will it open for business? Not if the Cebu City Anti-Indecency Board (CCAIB) has its way.

City Administrator Lucelle Mercado, who heads the CCAIB,  said the board is recommending closure of the East Paris KTV in APM Square Mall, which opened in the same location of the Las Vegas Music Lounge in barangay Mabolo where the city government closed the establishment in December last year for featuring lewd shows.

She said the closure order has been sent to the City Legal Office and is just waiting for the signature of Mayor Michael Rama.

A letter from  lawyers of East Paris KTV  said the new bar hasn’t opened yet and is still on a dry run.

“Officially, the letter hasn’t reached the CCAIB so we will proceed with our stand as expressed in our resolution.  We are still recommending closure,”  Mercado said.

She said CCAIB also sent a memo to City Treasurer Diwa Cuevas asking her to explain why a temporary business permit was issued to East Paris KTV.

A temporary permit was issued for the establishment to Ma. Kristina Mondragon after a second try.  The first application was denied by CCAIB because it had the same business classification as Las Vegas Music Lounge as a fast food establishment which can sell and serve liquor and have a KTV.

In its second application, East Paris KTV classified itself as a restaurant, which can serve and sell liquor and can have entertainment.

In a meeting last Tuesday, CCAIB recommended the closure of East Paris KTV based on  City Ordinance No. 1408, which states that  “no establishment of similar nature shall be allowed to undertake business in the premises within a period of one year from the date of closure.”

In a letter  to Mercado yesterday, KTV bar lawyers Inocencio de la Cerna Jr. and Hazan Bargamento said their client “deeply apologizes for the confusion” caused and pledged to follow all city ordinances and CAIB  policies. They said their client can’t open for business yet and was given  60 days to comply with all permit requirements.