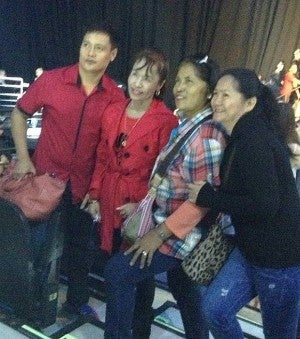 MACAU—Main protagonists Manny “The Pacman” Pacquiao and Chris Algieri haven’t showed up yet for the weigh-in but the crowd was already abuzz.

Tagging her 40-year-old boyfriend, Dionesia Pacquiao, fondly called Mommy D, was greeted with loud cheers when she arrived in yesterday’s weigh-in for the highly anticipated Pacquiao vs. Algieri: Hungry For Glory fight card at the Cotai Arena of The Venetian Hotel Macau.

Amid chants of “Mommy D! Mommy D!”, the 60-year-old Dionesia took her seat with her boyfriend Michael Yamson guiding her.

“I’m excited to watch the fight. This is my fourth time to watch Manny fight live,” Dionesia said in Filipino. “I am confident that my son will win. I am not nervous, but I don’t know during the actual fight.”

Dionesia, also known as the Pacmom, then held up her left hand and showed a rosary. “We need this (rosary). We have to pray. Let’s all pray that Manny will win the fight.”

Dionesia was clad in a red coat matched with a red blouse underneath. Yamson also wore a red polo.

“For me, red signifies victory. The fight has yet to start but we are already claiming victory,” said Dionesia.

Yamson, a native of Iloilo, is watching Manny’s fight live for the first time since he and Dionesia became an item.

When asked what was his advice for Manny to score a win, he said, “stay focused.”

When Manny stepped on the weighing scale, Dionesia stood up and pointed her fingers at the crowd, a scene that was a reminiscent of what she did during her son’s fight against Timothy Bradley last April.

“I was just praying,” said Dionesia of her actions.