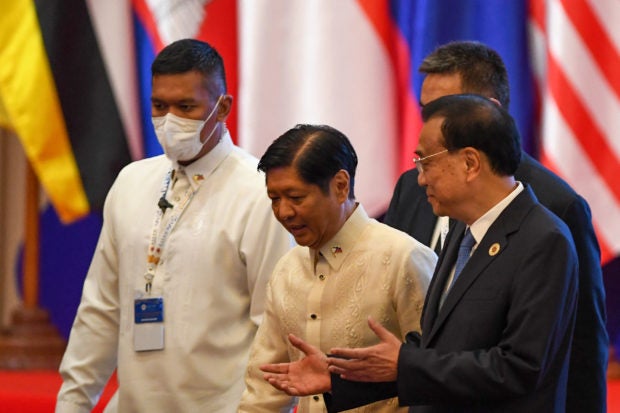 PHNOM PENH—A day after President Ferdinand “Bongbong” Marcos Jr. pushed for the completion of the Code of Conduct in the South China Sea, Chinese Prime Minister Li Keqiang said his country would work closely with nations in the region to ensure peace and stability on the basis of mutual respect for international law.

On Saturday, Li told Mr. Marcos that he looked forward to working with the Philippines in forging unity and cooperation between China and the Association of Southeast Asian Nations (Asean) amid persisting tensions.

Mr. Marcos conversed briefly with Li on the sidelines of the Asean Plus Three Summit here on Saturday. The Asean Plus Three consists of Asean’s member states and China, Japan and South Korea.During their conversation, the Chinese premier pushed for the continued growth of relations between Manila and Beijing.

“I look forward to working with the Philippines to uphold the unity and cooperation between China and Asean,” he said. “I also look forward to working with the Philippines and other countries in Asean for peace and stability in South China Sea on the basis of mutual respect and respect for the Declaration of Conduct of Parties in the South China Sea and international law, including the 1982 United Nations Convention on the Law of the Sea. Let’s work together for successful meetings,” Li told Mr. Marcos.

On Friday, Mr. Marcos called on all parties to work toward crafting the code that would set guidelines on claimants’ actions in the disputed South China Sea. He earlier lamented the slow progress in the conclusion of the code.

Mr. Marcos said the completion of the document would be an “example of how states manage their differences.”

“I, therefore, welcome the progress on textual negotiations on the Code of Conduct this past year and hopefully an approved code of conduct in the very near future,” he said.

The President is expected to make a state visit to China in the first week of January next year.During their talk on Saturday morning, Mr. Marcos and Li agreed to further deepen the partnership between their countries.“I believe there should be continued growth of China-Philippines relations. What we have in common far outweighs our differences,” Li said.

In response, the President thanked Li for remembering his father, former President Ferdinand Marcos Sr., and “his initiative to come to China.”

“It was he after all who made Philippines and China family… It was something very important to us. He has been proven right because the partnership with China has been a great benefit to both our countries. So I look forward to discussing all of these when I come to visit in January,” Mr. Marcos said.He also had a brief talk with Japanese Prime Minister Fumio Kishida on the sidelines of the Asean Plus Three Summit, during which both leaders agreed to strengthen the partnership of the two nations.

During the 19th Asean-India Summit also on Saturday, the President urged members of the regional bloc to work closely with India to ensure better access to medicines and vaccines, calling India the “pharmacy of the world.”

“Asean friends, let us not miss the opportunity of having the ‘pharmacy of the world’ as our close neighbor and dialogue partner. The high cost of life-saving medicines and vaccines are barriers to a healthy population,” Mr. Marcos said.

The President asked for India’s and Australia’s support for the Philippines as Asean’s candidate to the United Nations Security Council from 2027 to 2028.