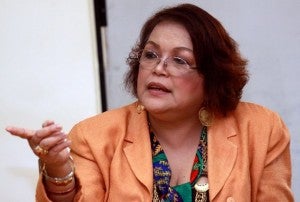 Oliva, who committed the offense when she was treasurer of Dumaguete City in 1990, was meted the penalty of up to 10 years in prison.

THE Sandiganbayan found  former Cebu City treasurer Ofelia Oliva guilty of graft in the overpriced procurement of a cattle scale nearly 25 years ago.

Oliva, who committed the offense when she was treasurer of Dumaguete City in 1990, was meted the penalty of up to 10 years in prison.

She was also permanently  barred from  government service after she was found guilty of violating Republic Act No. 3019, otherwise known as the Anti-Graft and Corrupt Practices Act.

Oliva can still appeal the decision  to the Supreme Court.

Cebu Daily News tried, but failed to reach Oliva through her cellular phone. A text message sent to her was also unanswered.

According to Toledo City Mayor John Henry “Sonny” Osmeña, Oliva was  no longer with the Toledo City government since Sept. 3, after he refused to accept the former treasurer’s reassignment.

But Osmeña clarified that his decision  has nothing to do with the anti-graft case.

“We had a number of disagreements but it was not about performance or integrity but policy. I just didn’t agree with her plans to increase business taxes or revenues in the city,” the mayor told CDN.

Osmeña said he was nonetheless grateful to Oliva for having served Toledo City.

Osmeña said Oliva was designated by the Department of Local Government and Finance (DLGF) as treasurer of Toledo City and he did not have any choice but to pick her.

“A city treasurer is designated by the BLGF (Bureau of Local Government Finance). I didn’t have an option to reject a nominee. By the time she was endorsed by the BLGF, I was not aware that she’s facing any charge before the anti-graft court,” he said.

In its ruling promulgated on Nov. 24, the Sandiganbayan’s second division said Oliva should be held accountable for buying a weighing scale for a cattle worth P130,000 without a public bidding in 1990.

The cattle scale was allegedly overpriced by P45,000 and was also found to be of inferior quality.

Records showed that Oliva looked for a supplier of the equipment in Metro Manila after the city government’s bids and awards committee declared a failure of bidding.

The former treasurer earlier claimed she went to at least five stores before she bought the cattle scale from Joe Bart Enterprise.

While shopping and direct negotiated purchase were allowed in cases of failed bidding, the Sandiganbayan said Oliva bought the Suprema G3 scale for P130,000, or P45,000 more than the approved budget.

The court cited the law which instructs that a personal canvass be done in the locality. In this case, the personal canvass was conducted in Manila instead of Dumaguete City. Known as the dancing treasurer, Oliva was removed by the BLGF as Cebu City treasurer in March 2012.