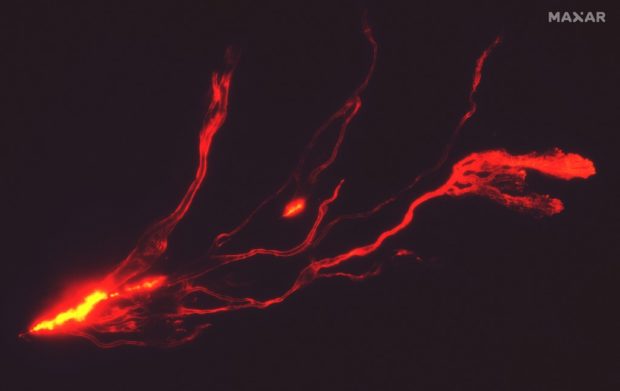 This handout image released by Maxar Technologies on November 29, 2022, shows long lava flows from Mauna Loa in Hawaii. – Hawaii’s Mauna Loa, the largest active volcano in the world, has erupted for the first time in nearly 40 years, US authorities said, as emergency crews went on alert early November 28, 2022. Fountains of lava up to 200 feet (60 meters) high have been fired into the air from Hawaii’s Mauna Loa, geologists say, generating rivers of molten rock from the world’s largest active volcano. (Photo by Maxar Technologies / AFP)

Los Angeles, United States  — Fountains of lava up to 200 feet (60 meters) high have been fired into the air from Hawaii’s Mauna Loa, geologists say, generating rivers of molten rock from the world’s largest active volcano.

Four fissures have now opened up on the mammoth mountain, which burst into life on Sunday for the first time in almost 40 years.

Vast clouds of steam and smoke were billowing into the sky from the volcano, which makes up half of Hawaii’s Big Island.

“Estimates of the tallest fountain heights are between 100–200 feet” but most are much smaller, the United States Geological Survey said in an update Monday.

“There is a visible gas plume from the erupting fissure fountains and lava flows, with the plume primarily being blown to the Northwest.”

Geologists say there is currently no risk to people and property below the eruption.

“The longest and largest lava flow is issuing from fissure three,” the USGS said Tuesday.

“This lava flow crossed the Mauna Loa Weather Observatory Road… and the flow front was located approximately six miles (10 kilometers) from Saddle Road (the main road at the foot of the northern flank).”

The lava fountain from the newest fissure was up to 33 feet high, the agency said.

Everything is currently contained in the Northeast Rift Zone, the USGS said, but warned Mauna Loa is a dynamic volcano.

“Additional fissures could open along the Northeast Rift Zone below the current location, and lava flows can continue to travel downslope.”

Pressure has been building at Mauna Loa for years, the USGS said, and the eruption — which lit up the night sky — could be seen 45 miles (72 kilometers) away, in the west coast town of Kona.

While lava is not presently a risk to populations, scientists have said winds could carry volcanic gas and fine ash downslope, as well as Pele’s Hair — fine strands of volcanic glass formed when lava skeins cool quickly in the air.

Named after Pele, the Hawaiian goddess of volcanoes, the strands can be very sharp and pose potential danger to skin and eyes. 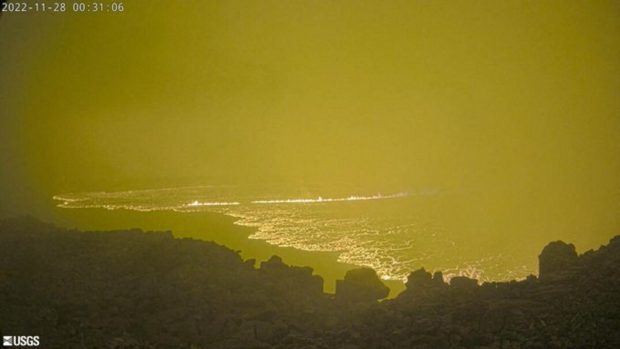 This webcam image released by the US Geological Survey (USGS) on November 28, 2022 courtesy of the National Weather Service, shows the lava in the summit caldera of Mauna Loa in Hawaii, which is erupting for the first time in nearly 40 years. – Hawaii’s Mauna Loa, the largest active volcano in the world, has erupted for the first time in nearly 40 years, US authorities said, as emergency crews went on alert early Monday. (Photo by Handout / US Geological Survey / AFP) /

Authorities in Hawaii have not issued any evacuation orders, although the summit area and several roads in the region were closed, and two shelters have been opened as a precaution.

The largest volcano on Earth by volume, Mauna Loa, whose name means “Long Mountain,” is larger than the rest of the Hawaiian islands combined.

The volcano’s submarine flanks stretch for miles to an ocean floor that is in turn depressed by Mauna Loa’s great mass — making its summit some 11 miles above its base, according to the USGS.

One of six active volcanoes on the Hawaiian islands, Mauna Loa has erupted 33 times since 1843.

Its most recent eruption, in 1984, lasted 22 days and produced lava flows reached to within about four miles of Hilo.

Kilauea, a volcano on the southeastern flank of Mauna Loa, erupted almost continuously between 1983 and 2019, and a minor eruption there has been ongoing for months.