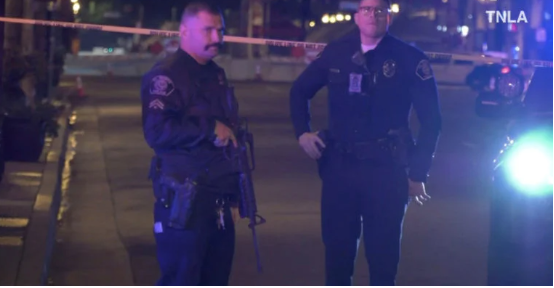 Screenshot from a viodeo shows police officers standing guard at the scene of a shooting at Monterey Park, California, U.S. January 22, 2023. TNLA/Handout via REUTERS

The shooting took place after 10 p.m. (0600 GMT) around the location of a Chinese Lunar New Year celebration held in Monterey Park, the newspaper said.

It was not clear how many people had been injured or killed, or if the suspect was still at large.

Tens of thousands of people had attended the festival earlier in the day.

The LA Times quoted the owner of a nearby restaurant as saying that people who sought shelter in his property told him there was a man with a machine gun in the area.

Seung Won Choi told the newspaper that he believed the shooting took place at a dance club.

Monterey Park is a city in Los Angeles county, around 7 miles (11 km) from downtown Los Angeles.

Your subscription could not be saved. Please try again.
Your subscription has been successful.
Read Next
PMI Bohol, Riverside Mandaue pugs log 2 wins in Villamor Boxing Gym’s grassroots program