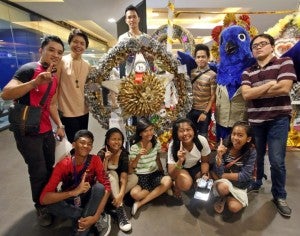 Most of the students were evacuees affected by typhoon Ruby which struck Dec. 6.

Then they thought about how a lantern should symbolize hope that never fades.

Their entry, a large gold and silver star made of used newsprint pages of CDN,  won first place.

It took three days for members of the Youth for the Environment in School’s Organization (YES-O) from Don Carlos Gothong Memorial National High School to finish the project.Gold and silver paint was sprayed to give the recycled material a touch of elegance.

Rommel Villahermosa, YES-O adviser, said the organization collects old newspapers, plastic and bottles for recycling as part of their advocacy. He said the ‘parol’ symbolizes hope and unity among Filipinos despite the disasters faced by the country.

Reyane Diacoma, one of the coaches, said it took three weeks for four grade 6 students to complete the work with their guidance coordinator Nerisa Limosnero.

They folded, weaved and cut newspaper pages for the tree, then decorated it with white and yellow lights.

The winners among the 15 entries were announced last December 18 at SM City where the lanterns and trees were displayed.

Read Next
Authorities look for ‘financiers’ of deadly Danao pit