‘Sto. Niño reminds us we are God’s children’ 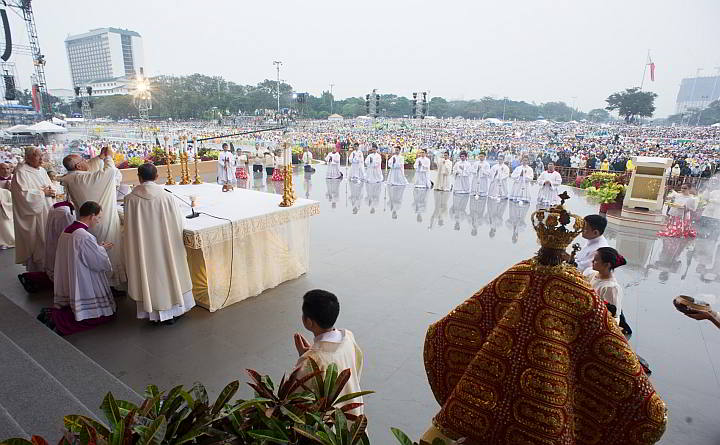 Pope Francis celebrates a Mass at Rizal Park. Millions filled Manila’s main park and surrounding areas for Pope Francis’ final Mass in the Philippines on Sunday, braving a steady rain to hear the pontiff’s message of hope and consolation for the Southeast Asian country’s most downtrodden and destitute. (AP Photo)

On the day of the Feast of the Sto. Niño, Pope Francis ended his apostolic visit to the Phiippines with a message to cherish one’s identity as God’s children and protect the family.

He called the Philippines  the “foremost Catholic country” in Asia whose citizens have a vocation to be “missionaries of faith” in the region.

Celebrating his concluding Mass at the Quirino Grandstand before euphoric Filipinos, the Pope wove his homily around the symbolic message of the Holy Child.

“In these days, throughout my visit, I have listened to you sing the song: `We are all God’s children.’ That is what the Sto. Niño tells us. He reminds us of our deepest identity. All of us are God’s children, members of God’s family,” he said.

“This is who we are. This is our identity. We saw a beautiful expression of this when Filipinos rallied around our brothers and sisters affected by the typhoon,” he added, referring to 2013 supercyclone. 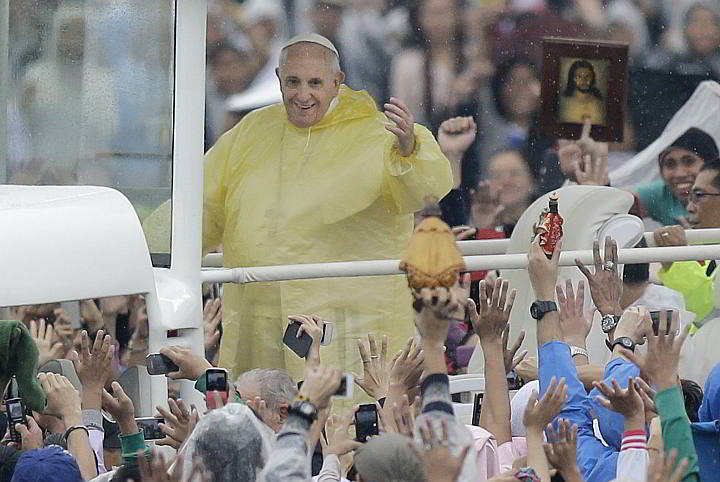 The torrential rains had left many in the crowd wet, cold and freezing.

The number surpasses the 5 million who turned out for St. John Paul II’s final Mass in the park 1995.

The Pontiff blessed an image of the Holy Infant before beginning the multi-lingual Mass. Many in the crowd up their own images of the Sto. Nino.

Francis warned of the devil’s distractions, “promise of ephemeral pleasures” and superficial pastimes, such as ‘tinkering with gadgets,’ that make people forget.

“For children, as the Lord tells us, have their own wisdom, which is not the wisdom of the world. That is why the message of the Sto. Niño is so important. He speaks powerfully to all of us. He reminds us of our deepest identity, of what we are called to be as God’s family,” he said.

“The Sto. Niño also reminds us that this identity must be protected. The Christ Child is the protector of this great country,” he continued in the Mass attended by President Aquino and Vice President Jejomar Binay, and millions in the crowd.

He said  the Gospel points to the need to protect and guide young people “’to build a society worthy of their great spiritual and cultural heritage”  and ensure they are not condemned to life on the streets.

“Sadly, in our day, the family all too often needs to be protected against insidious attacks and programs contrary to all that we hold true and sacred, all that is most beautiful and noble in our culture,” he said.

The Mass was offered for the intentions of victims of typhoon Yolanda.

He commended all  Filipinos to Jesus “who came among us as a child.”

“God has blessed us in Christ with every spiritual blessing in the heavens. These words have a special resonance in the Philippines, for it is the foremost Catholic country in Asia; this is itself is a special gift of God, a blessing,” he said.

“But it is also a vocation. Filipinos are called to be outstanding missionaries of the faith in Asia,” he added.

After his homily, he appealed to the crowd: “Please pray for me. And God bless.” A hush fell over the crowd. “Don’t forget to pray for me. God bless you.”

The prayers of the faithful were said in Hiligaynon, Kapampangan, Ilokano, Cebuano, Waray and Bikolano.

Words of gratitude overflowed after the final Mass.

“Your love for the Filipino is stronger than all typhoons. Your love is typhoon-proof,” he said, drawing applause.

For his part, Cardinal Tagle asked the Pope to “send us as your missionaries of light.”

“…every Filipino wants to go with you, not to Rome, but to the peripheries. We want to go with you to the shanties, to the prison cells, to hospitals, to the world of politics, finance, arts, the sciences, culture, education and social communication,” he added, drawing the Pope’s attention.

The pope who will return to Rome today.

He ended his homily saying, “May the Santo Niño continue to bless the Philippines and may he sustain the Christians of this great nation in their vocation to be witnesses and missionaries of the joy of the Gospel in Asia and in the whole world.”