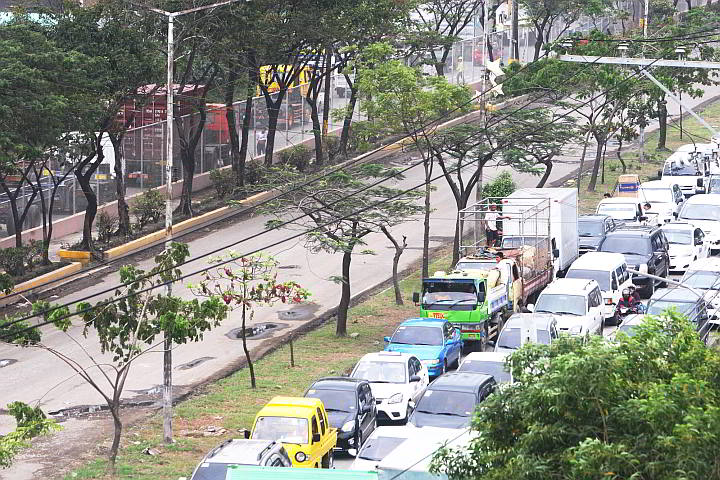 Plans to rehabilitate the road and remove concrete center islands will “leave planted trees alone” according to the Department of Public Works and Highways (DPWH) 7.

Without a tree-cutting permit, the agency can’t remove the Acacia trees that remain along the length of the national highway.

“The Department of Environment and Natural Resources (DENR) will not issue us a permit.  We will maintain the trees and come up with a design to maximize the space with the trees,” said DPWH Regional Director Ador Canlas.

“But definitely, without a permit, we can’t cut or remove trees.”

After almost 100 trees in the earlier road section repaired by WT Construction were mysteriously uprooted in April last year,  triggering an angry privilege speech by City Council Nida Cabrera and criminal charges, the resumption of work on S. Osmeña Road provides cause to keep a watchful eye.

Canlas told Cebu Daily News the remaining trees will be allowed to grow in a square-meter of soil as breathing space in the concrete roads to be installed, just like the ones in the newly paved road beside the Qimonda Building. 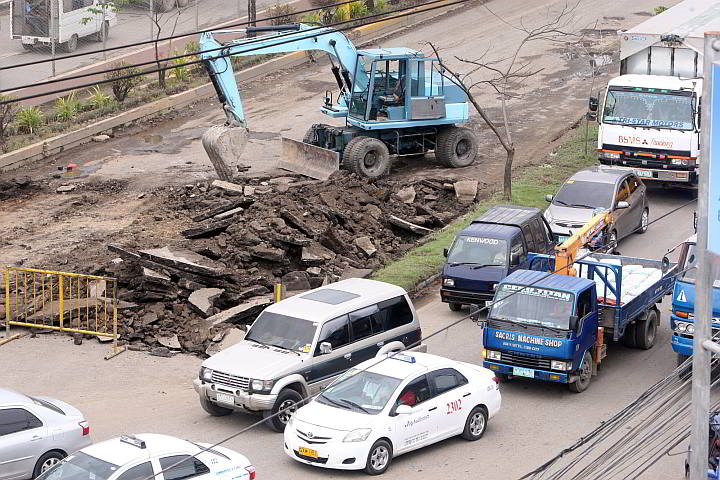 A backhoe starts removing the asphalt layer of S. Osmeña road near SM City and the Cebu International Port. Further ahead is a center island planted with Acacia trees. (CDN PHOTO/TONEE DESPOJO)

OUR ADVANTAGE
Since Saturday, Cebu City Hall has closed parts of  S. Osmena Road as part of a traffic experiment.

The sudden road closure works to the advantage of DPWH.

“It was City Hall that initiated that. We’ll take advantage of the closure to maximize the roadwork although we’re still on schedule,”  Canlas told Cebu Daily News.

The 2.5 kilometer road concreting of the  S. Osmeña road is expected to finish in April this year.

“That (closure) will help us as long as they take care of traffic management,” Canlas added.

Cebu City Mayor Michael Rama said he wanted the potholes and “craters” in the road paved to avoid vehicular accidents.

WT project consultant Engr. Adolfo Quiroga said they already started working on the area with potholes and target to finish by April or early May, depending on the weather since work has to stop when it rains.

“It’s as if the city government is fast-tracking the S. Osmena concreting for DPWH,” commented Citom executive director Rafael Yap.

Mayor Rama had wanted the national road completed before the Sinulog last month.

But several issues came up, including the clamor of business establishments to have the road accessible for customers and the criminal case for destruction of trees along the road’s center island.

The case was filed by the DENR 7 against WT Construction but the Cebu City Prosecutor’s office dismissed it a few months ago saying there was no evidence shown, including the CCTV video excerpts  turned over by the city government, that the contractor was responsible for uprooting and hauling away the trees.

Even with the case dismissed, Canlas assured the DPWH would leave the trees where they are.

“We will not be touching the trees anymore. While the case has been dismissed, the DENR hasn’t given us a permit,” he said.

This was echoed by DENR 7 spokesman Eddie Llamedo who said the agency has already filed a motion for reconsideration with the prosecutor’s office.

“We have not lifted the cease and desist order because DPWH failed to comply with three conditions in the order. It means the CDO is still in force,” said Llamedo.

Read Next
Capitol can only mediate, not decide on Talisay budget feud