Citom to study traffic plan for Mandaue’s side of NRA

‘BALL IS IN THEIR COURT’ 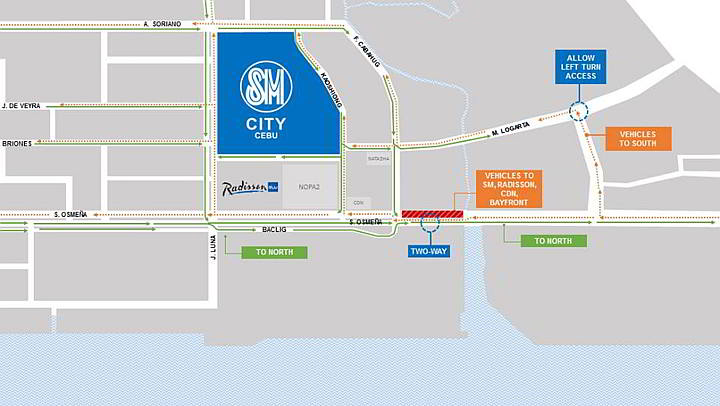 The re-route map for motorists and commuters coming from Mandaue City and heading to Cebu City.
Source: PIO MANDAUE

Motorists and commuters heading to either Cebu City or Mandaue City via the North Reclamation Area (NRA) are advised to leave home early and be patient.

This as traffic congestion is expected to occur again at the roads leading to Cebu City at the Mandaue Reclamation Area as city residents rush back to their schools and offices after the weekend break.

Joy Tumulak, operations chief of the Cebu City Traffic Operations Management (Citom), said they will continue to implement today the same rerouting plan which they adopted last week because this was proven to be effective.

“Walay may problema sa Cebu City side kay ma control man namo ang (There’s no problem in the Cebu City side because we can control the) traffic,” Tumulak said in an interview with Cebu Daily News.

He said congestion problems only happen in Mandaue City’s side and so he asked the Traffic Enforcement Agency of Mandaue (TEAM) to prepare their own plan to deal with traffic congestion their area.

Team head Erwin Ermac said they proposed to Citom to allow two-way traffic at the Block 27 portion of the  S. Osmeña Road during a February 27 coordination meeting held at the Cebu City Engineer’s Office.

Citom closed a portion of the mountain-side lane of S. Osmeña road located close to the Mahiga Creek to allow removal of its asphalt overlay and replace it with cement.

“Igo ra ta ni cooperate sa DPWH (Department of Public Works and Highways) kay nakasabot sad mi sa ilang dinalian nga trabaho (We are just cooperating with the the DPWH because we understand that they are expediting their work),” Tumulak said.

Because of ongoing roadworks, Citom only allowed use of the national road’s northbound lane.

Traffic flow slows down to a near crawl as vehicles from Mandaue City  headed for Cebu City and trucks headed for the port congest Logarta Street, which is S. Osmeña’s parallel road and the NRA’s remaining access to the south.

Trucks traveling along Ouano Avenue in Mandaue City are required to make a right turn to an access road located beside the Aboitiz football field and then turn left to join south traffic flow along Logarta Street.

Both lanes end up being blocked while trucks maneuver to  the south bound lane of Logarta Street.

Traffic build-up in the area is a problem even during late at night.

Congestion extends to the vicinity of barangay Subangdaku to M.C. Briones Street.

Ermac is asking Citom to open the sea-side lane of S. Osmeña Road located beside the Cebu Ports Authority (CPA) building to two-way traffic flow in the area.

This way, trucks using the mountain-side lane of Ouano Avenue would be compelled to cross to its seaside lane when they reach the foot of Mandaue City’s side of the Mahiga  bridge.

Counterflow
Trucks will then counterflow and use the sea-side lane of S. Osmeña Road on their way to the nearby Baclig street to shorten their travel to the port area, Ermac said.

He claimed that the scheme was already approved by Citom during their February 27 coordination meeting but it was never implemented, resulting in congestion on Mandaue City’s side of the NRA.

Tumulak admitted that Team presented the proposal during the February 27 meeting. But he clarified that it wasn’t approved by Citom or the Cebu City government.

He said Citom supervisor Bernard Miñoza, who attended the meeting to represent him and Citom office head Rafael Yap, isn’t authorized to approve any traffic scheme on behalf of Citom.

Both Tumulak and Yap already had other commitments when they were notified about the February 27 meeting held at the office of acting Cebu City Engineer Jose Marie Poblete.

Tumulak said he received a text message on the meeting from Sherry Tuvilla, SM regional operations manager for the Visayas.

Tumulak said Citom is studying the viability of SM’s traffic proposal but it will take time.

He said both Ouano Avenue and S. Osmeña Road don’t have the same elevation.

He said based on SM’s proposal, trucks coming from Ouano Avenue will be traveling downhill while they transfer to the sea-side lane of S. Osmena Road near the CPA office.

Tumulak said Citom will also have to consult with truckers, the Cebu Ports Authority, motorists and taxi drivers who will be affected by the traffic plan.

Until they complete their evaluation, Tumulak said, all southbound vehicles will have to use Logarta Street.

From Logarta Street, trucks and other vehicles bound for the port area can make a left turn to F. Cabahug Street located near Natasha on their way to Baclig Street that is located inside the CPA compound.

To ensure smoother traffic flow, Citom designated three lanes out of the five-lane Logarta Street for southbound vehicles while the two other lanes will be used by northbound vehicles.

Cebu City Mayor Michael Rama earlier ordered the removal of the center island in a portion of Logarta Street located after the Mahiga Creek and beside block 27 to open a third lane for south bound vehicles.

Two to three traffic enforcers also man the intersection of Logarta and F. Cabahug roads during two-shifts daily from 6 a.m. to 2 p.m. and from 2 p.m. to 10 p.m.

Enforcers are also deployed in nearby intersections.

Read Next
Freed inmate prefers to stay in jail