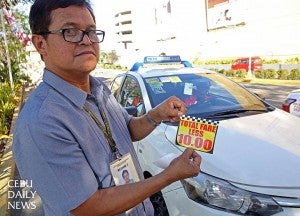 Reynaldo Elnar, OIC of the LTFRB- 7, shows the sticker placed on taxis advising the public to deduct P10 from the meter fare in order to implement the nationwide rollback of the flag down rate.
(CDN PHOTO/LITO TECSON)

It was his first offense for overcharging, but a painful one.

A cab driver who’s been driving for 10 years, will be the first in Cebu City to be fined P1,000 for not observing the P10 roll back in flag down rates which took effect yesterday.

The penalty extends to his operator Gladys Lee, who has to pay P5,000.

Both were called to the region 7 office of the Land Transportation Franchising and Regulatory Board (LTFRB) 7  after a passenger complained of overcharging.

The complaint came from Virgilio Villanueva, a technician of radio dyAB , who boarded the Zircon taxi cab about 8 a.m. In Maguikay, Mandaue City to go to Nivel Hills in Cebu City.

He paid P145 but the driver didn’t deduct P10 from the total meter fare.   The passenger didn’t argue with the driver but took note of the cab’s body number and texted his complaint to a radio anchor who was reporting on the air about the new P30 flag down taxi rate.

The complaint was relayed to the LTFRB 7, which called the taxi operator of Zircon, Gladys Dianne Lee who traced the driver.

The reduced flagdown of P30 instead of P40 was ordered by the LTFRB last Friday as a provisional or tempory order pending further hearings on a petition for a rollback in taxi service rates.

Since taxi meters are not required to be recalibrated,  taxi drivers have to deduct P10 from the total amount reflected on the meter and the printed receipt.

The driver, a native of Escalante, Negros Occidental was very apologetic when he faced the officials of LTFRB.

He admitted charging the whole amount on the meter and said he didn’t know the new flag down rate would start yesterday.

Villanueva was his second passenger yesterday who likewise didn’t get a deduction.

The cabbie said other weren’t aware of the new order.

Since it was a first offense, Senining is required to pay P1,000 and the taxi operator must pay a P5,000 penalty under the Joint Administrative Order (JAO).

The IRS becomes final after 72 hours.

If the driver or operator denied the offense, Antepuesto said he would set a date for a hearing, which all parties, including the complainant would have to attend.

Senining said he was ready to face the consequence of his action.

He apologized to his passenger through the interview.  If the order is not reconsidered, the driver said he couldn’t  do anything except to obey it.

The driver said he earns about P500 a day with his cab, a meager amount  to support two children in high school.

“The penalty for the operator is bigger than the driver’s.  Based on the Joint Administrative Order (JAO), “overcharging” falls under a franchise-related violation,”’ said LTFRB 7 Officer in charge Reynaldo Elnar.

The penalty for the second offense and third offense is the same P1,000 fine for the drivers .

However, the operator has to pay P10,000 and his franchise will be suspended for the second offense.

For a third offense, the operator must pay P15,000 and his franchise gets canceled.

To alert the public, Elnar led agency officials in placing stickers in cabs outside SM City informing them about the P10 rollback.

All set for Weley So Cup division finals